HomeNewsJim Ross Takes Issue With Seth Rollins’ ‘Minor League’ Dig, Says ‘Maybe Someday He’ll Be As Over As His Girlfriend’ 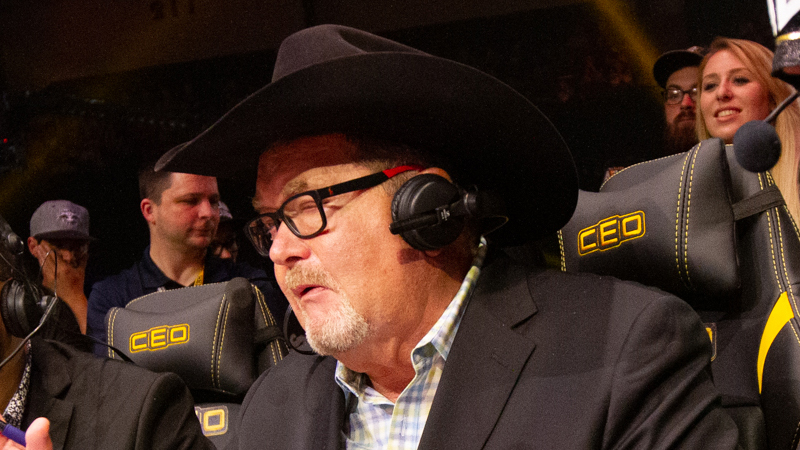 Jim Ross was in a “cantankerous” mood once more this week on Grilling JR with Conrad Thompson and something that gave the legendary voice of wrestling a case of the “red ass” were the recent comments Seth Rollins made about Kenny Omega being in the “minor leagues” of AEW. JR made it clear that he isn’t implying that he believe Seth thinks that he’s bigger than the wrestling business, but did think labeling any promotion like that is detrimental to the genre as a whole:

“You’re right, I’m pissed off about it. Here’s what I’m pissed off about: Number one, it doesn’t do any favors for our business. Our business in general, any promotion in the total of all the pro wrestling business it’s bigger than any individual. Now I’m not inferring that Seth thinks he’s bigger than the business,” Ross said, “but by what he says sometimes, you can make that assessment, rightly or wrongly, but it’s not a classy thing to say, for an athlete of his designation.

JR does commend Rollins for his ring work, but makes it clear who the real draw is in WWE, noting that it’s more about the brand today than it is the individual wrestler. “Since this came out, I talked to two Hall of Fame guys—off the record cause I’m not going to throw them under the bus—that were embarrassed about those remarks as well. It doesn’t do the business any good and one of these cats even said to me, ‘Well maybe Rollins is breaking under the pressure because he’s getting a lot of criticism.’ You know, here’s the deal folks: the WWE today is a whole different world than it was when guys were earning a buck or a downside guarantee significantly, based on what the live events and the PPVs were producing.”

“As another Hall of Famer has mentioned to me, it’s not about the individuals being over or drawing the house or selling out, it’s about the WWE brand selling out. Hence, the best illustration is WrestleMania. The brand name WrestleMania and the parent company, the big dog in the yard, WWE is what sells tickets to WrestleMania under the auspices that they’re going to do deliver a special show, opponents and participants to be named. But Rollins is in a great spot, he’s blessed, maybe someday he’ll be as over as his girlfriend, I don’t know, but nonetheless, I’ve always liked his work. He’s a solid guy, he’s a solid guy, but saying things like that make him look bad and for that I feel bad for him. I just do.”

JR also shows where his focus is as far as it goes to a weekly pro wrestling product. His sights are specifically on AEW, not what WWE is doing.

“Here’s the thing I find incredulous about this deal—one of the things. He says, ‘Well, when you’re through playing in the minor leagues…’ Ironically, Mr. Khan’s got more money than Vince,” Ross said, “but nonetheless, that’s another story for another day. We believe we have a great network in TNT, we think we have a chance to build a nice brand. You never heard from me ever, Conrad, even when we’re drinking, say ‘we’re gonna kick WWE’s ass.’”

After a WWE 2K20 plug, Ross praises how great of a dream match Kenny Omega vs. Seth Rollins would be and gives his reasons for being upset about the comments.

“If Omega and Rollins did have a match it would be a great match because both of them are great workers. I was upset at Seth because I thought his comments made him sound bad, made him sound bush league. Made him sound like he was one of those guys that was born on third base, woke up and thought he hit a triple because it’s just, for a guy that worked his way through the indies and Tyler Black and Ring Of Honor, great hand, I don’t know what happened some of these guys.”

JR then speculated as to what might have motivated Seth to make those comments, citing several aspects that could have charged up such motivations:

“I just believe sometimes it’s internal, sometimes what they’re driven to say, what they feel obligated to say, they say things that they think will gain the favor of their bosses, I don’t know. I don’t know what the answer is, but for a top talent that’s being blessed with great health right now—thank God—and making a ton of money and dating the hottest woman in the business, arguably by many, man what do you got to bitch about?” Ross asked. “Are you kidding me? We’re over there working our ass off and a lot of us have dedicated our lives longer than you’ve been alive to this business, and we’re busting our balls without knocking – I’m not knocking WWE. I think it’s a bad thing when you’re knocking a company that’s working our ass off to be good.”

Ross shares his frustrations with Conrad, comparing the criticism Seth gave to a major corporation criticizing how Conrad worked in developing his mortgage business.

“It’s just frustrating, Conrad. You booked your mortgage business from the goddamn ground up, man and so somebody say, ‘Conrad, that little rinky-dink company that’s not as big as Chase or somebody,’ right? That’d piss you off. Well, it’s successful and you’re working your ass off, and you’re a good guy and you love what you do. That’s kind of where we are in this AEW thing. Young team, ever-evolving, going to continue to grow, going to continue to make mistakes, gonna have to tweak our styles here, there and yon, but so what? So what?” Ross said. “That’s what growth is about and evolution. So it will be a fun journey that we’re on, but again, my deal with Seth is not his work. All those guys are playing under different rules than the guys on the old Attitude roster that we put together. And guys that I talked to today, not just specifically about this matter but this matter was included, says it’s just a whole different locker room, different world, different mindset. And some of that charm of the old school wrestler is slowly slipping away and for that I say that’s a damn shame.”

You can listen to the full episode of “Grilling JR” as he and Conrad also go over Buried Alive 1996 below: