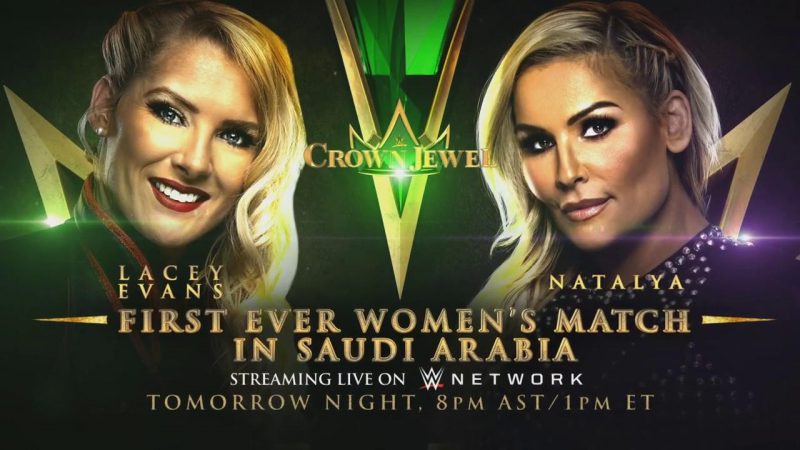 WWE has just confirmed they will host their first-ever women’s wrestling match in Saudi Arabia as Natalya and Lacey Evans will face off at WWE Crown Jewel on Thursday.

WWE announced the move at a press conference at King Fahd International Stadium in Riyadh; the full announcement is below:

Natalya and Lacey Evans have both posted the following remarks about the match since the announcement:

The world will be watching. I am so incredibly proud to represent our women’s division tomorrow night at #WWECrownJewel. It’s time to bring your best, Lacey. pic.twitter.com/TeglMWzbZM

I never thought I'd have the opportunity to do the things I've done with @WWE. Tomorrow I get to show my little girl that hard work can bring you to history-making heights. I'm ready for this. ❤💪 #WWECrownJewel pic.twitter.com/myQWjd9i5W

Earlier this week, it was reported that Natalya, Lacey and Lana had made the trip to Saudi Arabia, but it wasn’t known if any of them would wrestle on the show. WWE and their fans have made a push to host a women’s match in Saudi Arabia before, but had been unsuccessful in doing so on the first three shows that were included in a 10-year partnership between WWE and the Saudi General Sports Authority.