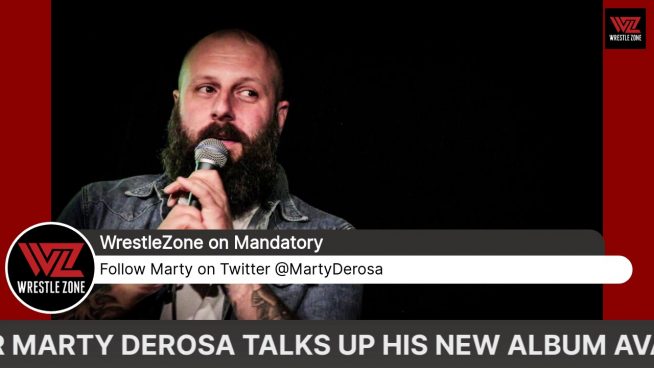 He can heard on commentary for AAW Wrestling and 5$ Wrestling, the acclaimed comedy series on HighSpots. He’s performed at Starrcast. He’s comedian in the wrestling world, and now he released his first stand up album ‘Live From Parts Unknown’. Marty DeRosa joins WrestleZone’s Kevin Kellam for this interview about the process of putting the material for the album over the years, how he balances his wrestling/comedy life, and shares insight into the craziness of locker room when guns get pulled out.

Marty DeRosa ‘Live From Parts Unknown‘ is available now on Spotify and all streaming platforms. It went to number 1 on the Apple iTunes comedy chart next to Jim Gaffigan, John Mulaney, and other big names.

Check out Marty on the weekly satire of all things wrestling in the podcast ‘Marty & Sarah Love Wrestling’.

Comedy superstar Marty DeRosa chats up his new album 'Live From Parts Unknown'. It's available on Spotify, Apple, and all streaming platforms. Subscribe to the podcast Marty & Sarah Love Wrestling

Posted by WrestleZone on Mandatory on Friday, September 20, 2019