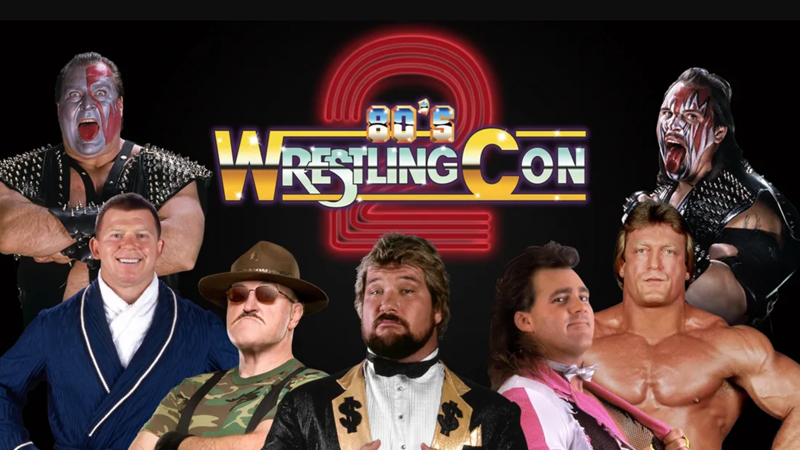 ’80s Wrestling Con 2 takes place on Saturday, October 26th in Freehold, NJ at iPlay America from 10 AM to 3 PM. Tons of WWE Hall of Famers and legends will be appearing at this event for photo and autograph opportunities, along with several attractions that will make this a can’t miss ’80s Wrestling Fan Festival!

There will be many different attractions taking place at this ’80s Wrestling Fan Festival and tons of vendor tables selling wrestling merchandise from the past and present. Some of the exciting attractions for 80’s Wrestling Con 2 include:

’80s Wrestling Halloween Costume Contest
One of the highlights of ’80s Wrestling Con 2 will be an 80’s Wrestling Halloween Costume Contest! Channel your inner Hulk Hogan or Ultimate Warrior! Grab a friend and come dressed as The Road Warriors! Throw on a kilt and become Rowdy! Style and Profile like The Nature Boy! Bring your lady and be Macho Man and Miss Elizabeth! The possibilities are endless. The contest will be judged by “The Million Dollar Man” Ted DiBiase! The winner of the contest will receive a $100 from The Million Dollar Man!!

The Barber Shop with Brutus “The Barber” Beefcake
Brutus Beefcake will be struttin’ and cuttin’ at ’80s Wrestling Con 2. We will be holding a raffle where the winner will receive a haircut from Brutus! All proceeds from this raffle will go to a charity to be named soon. If you only want a little off the top or the back, no problem. The photo op alone will be priceless! The most important part is, it will be for a great cause.

’80s WWF Wrestling Tag Team Panel Live Q&A
Demolition (Ax & Smash) and The Killer Bees (B. Brian Blair & “Jumping” Jim Brunzell) will sit down at ’80s Wrestling Con 2 and talk about the tag team division in the ’80s in the WWF. If you are a fan of tag team wrestling, this is one panel you will not want to miss!

Bob Backlund LIVE! Q&A
Former WWF World Champion Bob Backlund will be live on stage as John Arezzi’s guest for Pro Wrestling Spotlight LIVE! John will be talking to Backlund about his amazing career and you can watch it live at ’80s Wrestling Con 2!

LJN Collector’s Corner
The old WWF LJN figures were a staple in ’80s wrestling and are still super popular to this day. We will have a special section at ’80s Wrestling Con 2 where fans can show off and display their LJN figures! They can talk with other collectors about them and even trade figures. So if you have LJN figures still new in package and want to show them off, bring them to the LJN Collector’s Corner!

Sgt. Slaughter Push-Up Challenge
ATTENTION MAGGOTS! You better get in the best shape of your life by October 26th for ‘80s Wrestling Con 2! The Sarge might call on you to drop down and give him ten, and that’s an order!

‘80s Wrestling Karaoke
Do you ever sing Real American or Girls in Cars while taking a shower?! How about Honky Tonk Man’s theme song or Piledriver?! Well you will have the opportunity to belt your favorite tune at ‘80s Wrestling Con 2! American Idol has nothing on this!

Vendor Info
WWE Hall of Famer TITO SANTANA and TATANKA have already been confirmed as official vendor guests for ’80s Wrestling Con 2. Some of the vendors already confirmed to appear include Nerds Clothing, Pro Wrestling World, RF Video, Ruined Creations, Santiago Sports, 350 Days Movie, artist Joseph B. Miller, Hastell Toy, and more. If you are interested in being a vendor at ’80s Wrestling Con 2, please Email us at: [email protected]

Autograph Op, Photo Op, and VIP Ticket For ’80s Wrestling Con 2
We STRONGLY urge you purchase your Autograph Op, Photo Op, and VIP tickets in advance to avoid large lines the day of the event. The Superstars will only be signing autographs for three hours and having your tickets before you arrive there will save you a TON of time. You can purchase them now at: 80sWrestlingCon.com

’80s Wrestling Con 2 Mail Order
Can’t make it live? Do you have magazines, programs, action figures or championship belts that you want signed by the guests? Do you want to order personalized autographed photos of the guests? Email us for more info on how you can get your items signed at: [email protected]

Need a Hotel?
If you are coming from out of town and need a hotel, Email us for special rates we have with surrounding hotels in the area at [email protected]