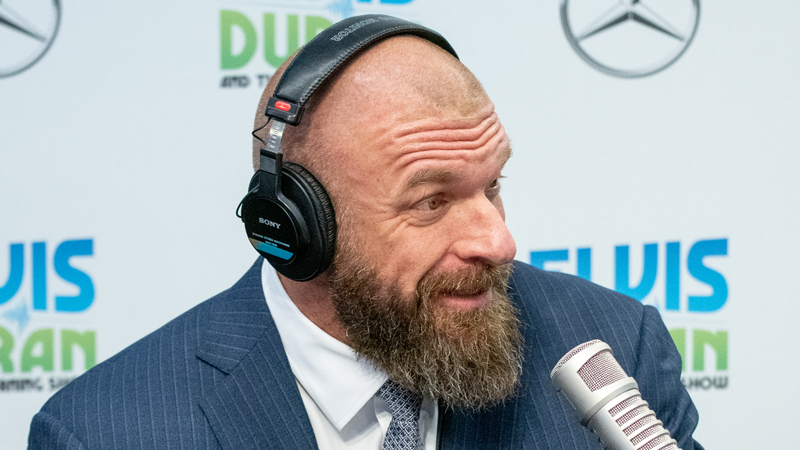 Triple H was the second of four guests on Corey Graves’ new podcast WWE After The Bell and the WWE COO talked the signings and interest of Cain Velasqueez and Tyson Fury who will both be competing on the Crown Jewel card tomorrow. Hunter explains how both these talents made their way into the WWE’s “Universe.”

“A bunch of names were thrown around. The Velasquez thing was shown around, obviously he had had some interest in this. He had been to the Performance Center. At the point and time when he came to the Performance Center and he worked out with us though he had shown the athletic ability but was kind of still, ‘Eh, I still like to fight and – ‘ you know, unless you’re all in with this it’s tough to really make a go at this, but since then I think he had kind of got in a different place with fighting and he had done a few matches with AAA.'”

“But he clearly had the interest so that reach-out was easy. The Fury one was another name that was put out there. It was more just a, ‘Hey, do you think there would be any interest?’ And I knew that he had interest in the business, WWE, from interviews past and also from, probably around the time I think even before he fought Klitchko, he had made a few inquiries around WWE and there was some conversation, very briefly back and forth, so I knew there was interest there, but when we reached out to him, just to say, ‘Hey, is there anything you’d ever want to do down the line?’ He was like, ‘Oh my God, I would love it, and not only that, but I have time right now if you had anything. It’d be perfect for me.'”

At first, Triple H said that he didn’t believe that Tyson was available, but soon learned that that wasn’t the case.

“When I first heard that, I was like, ‘That’s his team saying that. There’s no way he’s gonna want to do this.’ He’s got the Deontay Wilder fight potentially booked in like end of February and he’s just coming of a hellacious fight. So I thought, ‘There’s no way he’s going to want to do this,’ but it was immediately put out to us that, yeah he would be interested and now would be a great window for him.

“Turns out he’s a huge fan. So he’s grown up his whole life wanting to do this. This was interesting as we were doing all the media for it, one of the big questions that he got asked was, ‘Why would he do this? he’s risking a fight,’ he just kept saying, ‘I’m not going to live my life under what-ifs. This is me living out a fantasy right now and it’s the coolest thing in the world that I can do and I’ll do it.’ You know there’s risk in everything you do, but man, he’s loving it.”

Corey then asked Hunter directly if Cain Velasquez’s deal was long-term with WWE:

“Cain has a deal with us. Cain is a bit more long-term on the developmental. Like he wants to be a WWE Superstar now, much like Ronda did and is doing. I think the Cain piece of it will be just how good can he get, how quickly and what does that mean?”

The full first episode of After The Bell is available below:

RELATED: Wrestlezone Retrospective: Why D-Generation X Is Critical To The Pro Wrestling Timeline