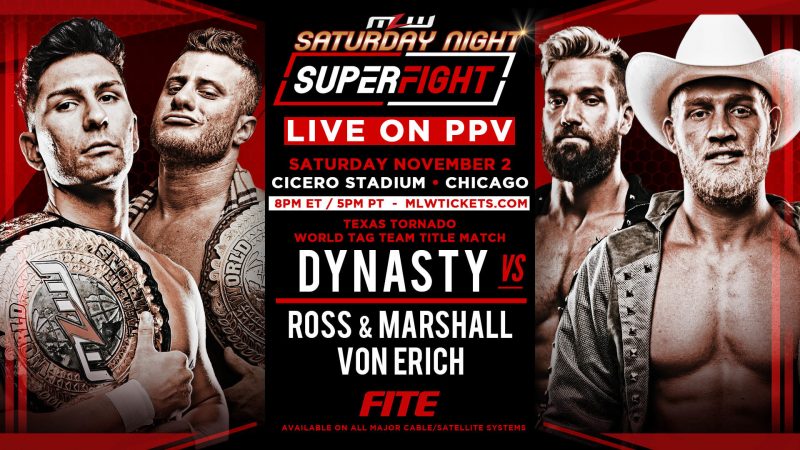 MLW just made it official: The Von Erichs will be challenging Richard Holliday and MJF for the World Tag Team Titles on November 2 at Saturday Night SuperFight on PPV. Rules will be right up the Von Erichs’ alley as the bout will fall under “Texas Tornado” rules. The company’s full announcement is below:

The number one contenders for the World Tag Team Titles will finally get their crack at championship gold in Chicago as the Von Erich boys challenge The Dynasty live on Pay-Per-View.

For over a month the Dynasty have relied on Richard Holliday’s father/lawyer to put up legal hurdles preventing the #1 ranked tag team, the Von Erichs, from challenging for the belts.

With a match set for Tijuana on October 5, the Dynasty lucked out with some contractual red tape that delayed the title fight indefinitely.

Soon thereafter rumors about MJF and Holliday having concerns about retaining in such a championship clash swirled around the MLW locker room.

Are the Dynasty running from the Von Erichs?

Did MJF falsify reports of having a mysterious injury?

Holliday’s father/lawyer allegedly unleashed a blizzard of legal memos to halt the Von Erichs from their pursuit of gold and realizing their own dynastic dreams.

But all of the Dynasty’s legal wrangling to try and bypass defending against the Von Erichs have been exhausted.

The league has confirmed the much-anticipated championship showdown is now officially a superfight… and will be fought under Texas Tornado rules. An ironic stipulation imposed by Court Bauer due to the aggravation of personally dealing with Holliday’s father/lawyer for nearly two months as the Dynasty desperately looked to avoid the match.

The Texas Tornado match was invented by the Von Erich family and is a modified Tag Team match, where all the members of both teams are allowed to wrestle in the ring or ringside at the same time.

In a match where anything can and will go, the rules are simple in this title bout: pin your adversary and to the victors go all of the spoils.

Who truly is the dynastic tag team?