HomeNewsGeorge Kittle On Getting Props From The Rock, The Current Buzz Surrounding The Pro Wrestling World 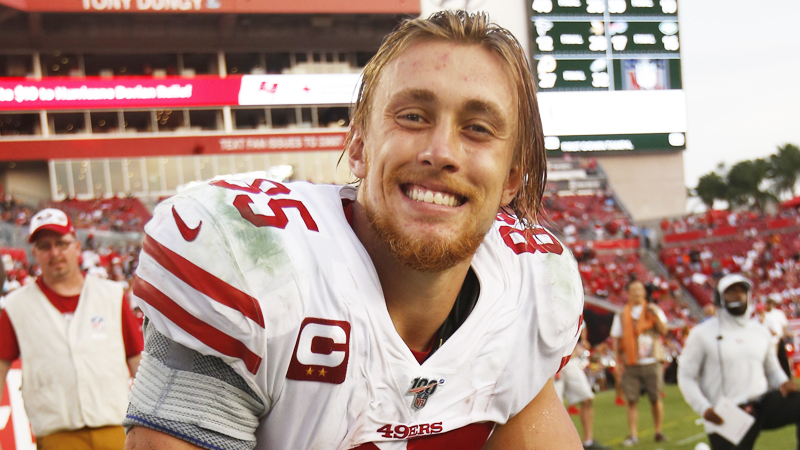 Kittle recently spoke with Wrestlezone’s Dominic DeAngelo about his pro wrestling fandom, and recent promo that caught the attention of a certain ‘electrifying’ personality. Kittle and his Niner brothers recently beat the Pittsburgh Steelers to move on to 3-0 on the NFL season. After the game, Kittle channeled The Rock and ‘The People’s Tight End’ cut one fine promo about what the Niners are doing on the field, and got to do another rendition of it backstage while at SmackDown. Kittle’s mic work caught the attention of The Rock, who gave Kittle the tip of the cap on Twitter and George is still on cloud nine about it.

“Uh, I think I’m still dreaming. I don’t know if I’ve woken up from that one yet. I’ve been pinched a couple times, but I think I’m still dreaming. The Rock, he’s such a personality.” Kittle said. “He’s such an influential person. The fact that someone that I’ve watched and I’ve idolized since I was a little kid and being able to get a response from him and gave some respect, it’s incredible and it’s a special moment that I won’t forget and it’s something I’ll definitely remember forever.”

EXCLUSIVE: The @49ers' @gkittle46 is backstage at #SDLive to remind everyone he might have the best @TheRock impression in the GAME. pic.twitter.com/A0mOb6YbpV

Kittle digests wrestling in all facets and forms too, and talked about the plethora of wrestling viewing options these days. He says he’s jazzed as any fan about having practically week’s worth of wrestling on the horizon, and knows that competition is good for the industry.

“Oh, I’m pumped. I mean I think the more wrestling the better. Competition is great for the sport and just having all that wrestling and being available to people I think is awesome and just here to watch so many different forms of it whether it’s AEW, WWE, NXT, I catch an IMPACT show every once and awhile cause I like that.” Kittle said. “I occasionally snag a Lucha Underground which I also really enjoy that. I watch a lot of it, but I’m really excited to see—we got Monday Night RAW, Wednesday is NXT & AEW and Friday SmackDown? I’m stoked, it’s going to be a blast.”

Kittle says even his non-wrestling fan teammates feel the brawling buzz in the air, and you’re starting to see more eyes on the product due to wrestling getting so much more mainstream attention.

“I got guys on my team that usually give me a hard time about being a wrestling fan and now [they’re] like, ‘Hey, did you see the promo on FOX for WWE? That looks so much more fun. I can’t wait to tune in sometimes.’ I mean if my teammates are talking about it,” Kittle said, “then I know other people are talking about it. I’m excited. I’m pumped to just watch it and like we said, multiple days a week, you’re going to be able to watch it as much as you want. Yeah, you got Monday, Wednesday, Friday and plus you get PPVs on Sunday. It’s like four days a week, that’s pretty special.”