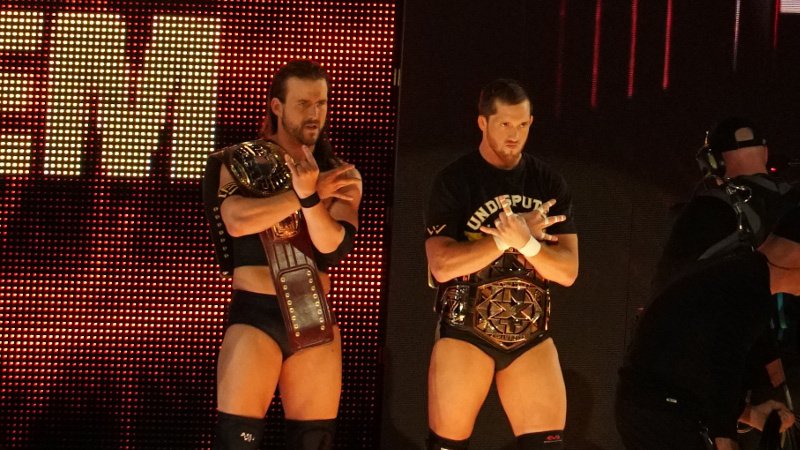 Speaking with TV Insider, all four members of the Undisputed Era had plenty to say on NXT’s place in the Wednesday Night Wars and their place on top of the brand. Faction leader Adam Cole is happy that he’s on a brand that’s now considered even with RAW and SmackDown.

Considering the brand and the matches we’ve been able to put on, I’m so proud. And being on USA Network it’s even bigger. I’m proud of our crew, and I know our crew is filled with the best wrestlers in the entire world. For me to be the flag barrier and lead the charge, it leaves a special place in my heart.

He’s also happy for some healthy competition. “You can like both. That’s okay. That’s the best part.”

Cole continued that the Era is a legitimate unit, both inside and outside the ring. “These are not just friends in wrestling but in my life. That’s a big reason the group is doing so well because the friendships and relationships are real. They can tell we are having a blast.”

Kyle O’Reilly is on the same page, saying that his journey in wrestling has led him to the same place as his friends as a single group. “We’ve faced each other in the ring. We’ve teamed with each other. Now on this journey, we find ourselves on this journey together as a unit. It’s perfect.”

Roderick Strong was the final piece to the puzzle that was Adam Cole’s prophecy that all four members of the Era would stand together as champion. It took him a long while to realize what they’d accomplished. “It’s also the hard place because we set expectations so high. We expect excellence and are always trying to achieve that. We always reminisce of old times. It’s crazy where we’ve been and where we’ve gone here.”

RELATED: 5 Things You Need To Know About Roderick Strong