HomeNewsTommaso Ciampa Reveals What The NXT Title Means To Him, TakeOver: WarGames

Tommaso Ciampa Reveals What The NXT Title Means To Him, TakeOver: WarGames

Tommaso Ciampa Reveals What The NXT Title Means To Him, TakeOver: WarGames 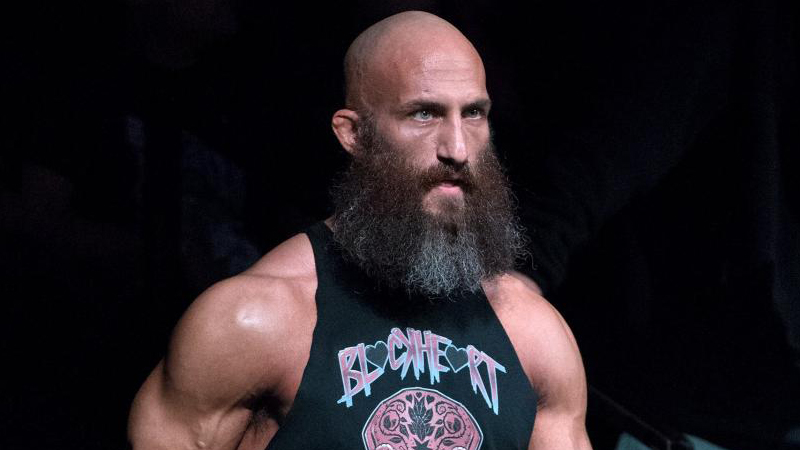 WWE NXT star Tommaso Ciampa was recently interviewed by Sporting News to talk about several professional wrestling topics. Ciampa talked about what the WWE NXT Title means to him, and the upcoming TakeOver: WarGames event.

SN: I know when you had to step away, that meant your championship reign coming to an end after 237 days. People can talk about this being entertainment and that it’s just a title but being the NXT champion and having that run meant a lot to you. Can you fully explain what the NXT title means to you?

TC: It’s the best, most prestigious, most coveted … it’s the pinnacle in this industry. It genuinely, truly is. I totally understand how somebody can think that maybe I’m playing a character when I say it, but I think it’s why the character was so damn believable, because I didn’t have to make up anything. Everything I was saying, I believe truly, to the core. The wrestling that I grew up on was this; it was NXT. Definitely not the athleticism factor or the in-ring factor — that’s evolved tremendously. But the storytelling part of it, that’s what grew up on. I grew up on these long, drawn-out stories with four pay-per-views a year where things paid off. Everything was done for a reason. Then all of a sudden, I find myself in NXT and I get to play that out. I’m playing out my childhood.

The thing with Johnny Gargano was over one year, two years long. That’s just stuff you don’t see anymore, and the fact that we’re delivering that and now on USA, people are starting to see on a weekly basis that we’re delivering it. We’ve been delivering it for years. I think our audience is going to grow and grow and grow. I keep in tune with as much as I can. I saw the rating numbers and everything. I think that NXT, when we get through that three-to-six month phase, when people start to get familiar with this product and they start to understand and see how different we are, how unique we are in our storytelling ability, people are going to get hooked. This thing is going to grow like wildfire. The second this thing starts to catch — I already have a hunch it’s starting to right now — it’s going to get ridiculous and it’s going to get ridiculous really fast.

As far as the NXT title goes, for me, I went 15 years never being the guy. Ever. Some of that time, four years or whatever it was, was spent in Ring of Honor, a lot was spent on the indies, a lot of it overseas. Through all that time, I was in the same promotions as Adam Cole, Kevin Owens, Kyle O’Reilly, Bobby Fish, Roderick Strong, Ricochet, Aleister Black, all these different guys and I watched all of them have their turn and it just never happened to fall on my lap. And all of a sudden, NXT, which I consider my home, it’s the hottest promotion going, and I finally got the ball. And dammit, that meant the world to me. It’s why I had neck surgery and said I gotta get back. I think I definitely had the option to walk away from it and maybe take on a role backstage.

For me, this career, it’s not over. I’m not done telling stories yet. The idea of getting back into a ring, which I’ve now done, the idea of getting back to the TakeOver stage, which is two weeks away, and then going forward from that, getting that damn title match that I’ve been waiting so patiently for. I have a lot stories left to tell. Even this Tommaso Ciampa character, persona, whatever, there’s an art to this character and it’s not close to being done yet. I know how many layers I have left, and I know how many things I haven’t even touched upon yet. I love the idea that it’s all right there in front of me and I can see it. I feel like I’m so many steps ahead with what I want to do. I’m kind of watching slowly as each thing unfolds and it just happens to be unfolding exactly the way I want it to. I’m in a real good spot right now. I had a 237-day title run and the next one is going to be even longer and it’s going to keep adding up.

SN: You’ve got TakeOver: WarGames coming up in a few weeks. You’re ramping your way back up and doing more and more back in the ring. What’s it going to be like to be on that show considering how big TakeOver events have become and especially with a War Games match which are pretty wild?

TC: I’ve been in NXT for two of these, and I haven’t been able to be a part of one. It bothered me, and I finally get to fulfill that and be a part of one. I don’t think there’s a performer in this world who makes better use of their surroundings than I do. I kind of have a little playground at TakeOver: WarGames and I already have a million ideas (laughs). It’s going to be the best TakeOver: WarGames in the history of NXT, and it’s going to be the best War Games match in the history of NXT. There’s not one doubt in my mind that both of those are going to be true. Undisputed Era is very experienced with War Games. They’ve been in two; they’ve won one, they lost one. They’re batting .500. In baseball, that’s really good. 50/50 in the NFL, that doesn’t make the playoffs so it’s all about perspective and how you look at it.

The way I look at it is we’re four dudes who are brothers who work really well, cohesively together. It’s myself, it’s (Matt) Riddle, it’s Keith Lee and a to-be-determined superstar. It’s four dudes who, we’re not the best of friends. I don’t think that’s a secret. We have a common enemy. That’s what’s going on here. Shoot, me, if I was going to go to war and you told me I could have Keith Lee, I’ll sign up on that one. And you told me I could have the freaking UFC madman Matt Riddle — he’s like the new Goldberg — I’ll sign up on that one too. I love the guys. I’ve got on my team and side-by-side, I’d rather have them with me than against me.

TakeOver: WarGames, I have a hunch it’s going to be really special, and the fact that I finally get to stand inside those damn cages, damn, it’s about time. I’ve been looking forward to that for a very long time. So, it’s going to be like my own personal playground.