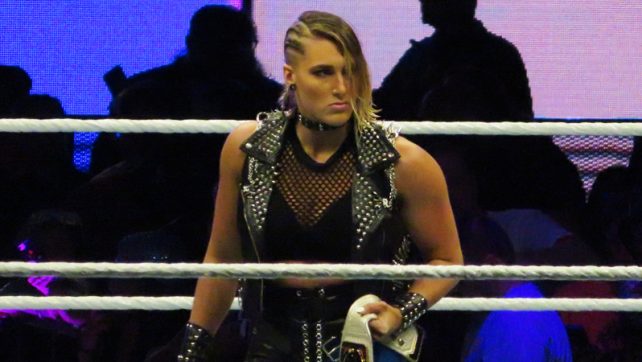 Rhea Ripley is ready for WarGames!

On the most recent edition of After The Bell with Corey Graves, Rhea Ripley opens up about the upcoming Survivor Series weekend where she will captain her team of combatants against a team led by Shayna Baszler.

Rhea has the utmost confidence in her quartet and lays out the strengths of each team member while talking to Corey Graves.

“Well, Team Rhea, we’ve got a wide variety of individuals on my team,” she began. “We have Mia Yim, who is one of the toughest people that I know. If you didn’t see and see the other day, I gotta tell you now, go back and watch it because she has some heart and she wins. She got pushed off a ladder to the outside of the ring through another ladder. And then to rock up on SmackDown just a couple of days after, be put into a match. And she’s the definition of toughness.

“We’ve got Candice LeRae. She’s a little fighter. If you haven’t seen her on the indies, I’d advise you to go watch it. She’s absolutely nuts. And she has been in matches like this before. She’s used weapons before. She’s done all of that. So I definitely wanted her on my team.

“And there’s Tegan Nox. Now, me and Tegan, we’ve got some history together. Me being the one that she was in the match with where she tore everything in her knee, pretty much. To come back from that twice, pretty much, and still put on like a good fight, you know? [she still manages] to have that heart in her and just keep going. She never gives up. She’s resilient. And that’s what drove me to picking her because I need people on my team that aren’t going to give up because it’s gonna be such a tough environment and I need them to stick through it.

“And I guess, then there’s me. I’ve been waiting for this my whole life, and I’m going to bring the pain,” she concluded.

Rhea also discussed her recent run-ins on SmackDown and named the captain of Team SmackDown at Survivor Series, Sasha Banks, as someone she wants to face.

“I really want to just face every single one of them,” Rhea said. “I had a little bit of a taste with Sasha Banks the other day on SmackDown, so I wouldn’t mind stepping in the ring with her. And also, Becky Lynch, I would love to face Becky Lynch.”

It is not yet clear whether she’ll be representing NXT at Survivor Series, but you can see Rhea and her team inside WarGames on Saturday, November 23, 2019.