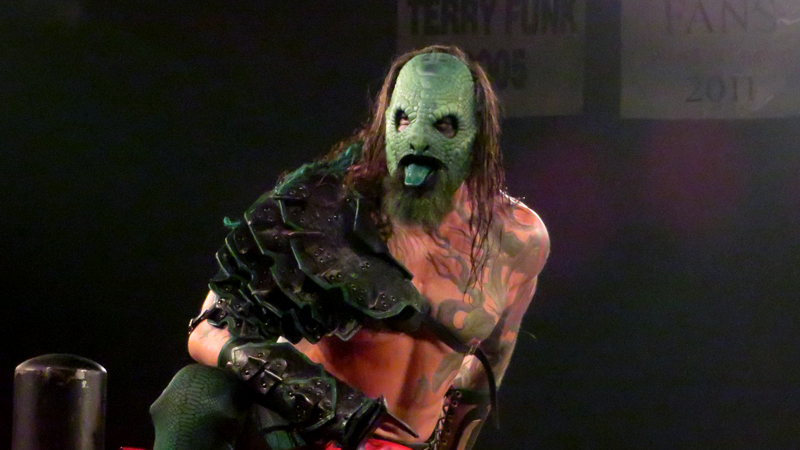 Luchasaurus was a recent guest on “Talk Is Jericho” and one-third of Jurassic Express talked about how he discovered himself as a wrestling character by donning the dino mask on. Luchasaurus spoke of how uncertain he was of the gimmick and look ever catching fire, but with the support of some of his colleagues decided to stick with it. By doing that, he believes that he has made a unique connection with the wrestling fanbase. Quotes are below:

Luchasaurus on his apprehension of running with the dinosaur gimmick because of first impressions:

“At first it was challenging to get bookings because i don’t think people were taking it seriously and in this day and age, it back and forth but there’s a lot of promotions that want kind of serious fighters and the idea of it just sounds absurd. It’s just like ‘What is this? It’s gonna be some kind of gimmick. The guy is probably not really a wrestler, he’s horrible or he’s just a clown. It’s a joke.’ So I had to fight against that for awhile and I was lucky to have good people in my corner that were like, motivated me to continue with it because there were times when I wanted to give up on it where I was like, ‘This is not going to get over on it’s own, it’s too absurd,’ but John Morrison’s really big on that. Trent Berreta who’s in AEW always told me to stick with it, he really liked it. So I did and it slowly but surely was allowing me to kind of explore who I was performing wise.”

On how he found the chemistry behind the mask:

“What the Luchasaurus really, is essentially, is me. And it’s kind of funny that it took me to putting on a mask to find myself? It’s kind of an interesting, like existential thing that I’ve gone through but what it started out was, is just like ‘Okay I’m going to be myself and express myself in the ring’ because I couldn’t figure it when I was in NXT, I couldn’t figure out on my own between the time of that and Luha Underground and I didn’t have direction. I was trying to find a character so hard, I was trying to force something. And then I just put this mask on and said, ‘You know what? What do I like? Well I like to do martial arts, I like gymnastics, I like Mortal Kombat. This is a crazy character, kind of lets me tap into my childhood where I like Conan The Barbarian. I’m just gonna kind of run with things I like and just be myself in the ring and see what happens. And slowly but surely I was able to develop a style and something that’s totally unique so now it’s like, people need to see the Luchasaurus in person or see me wrestle to kind of go, ‘Okay, I get it.’ Cause people will see it on paper and go, ‘What’s that?’ But when they see it, for some reason, I’ve been able to connect now with people and they say it feels authentic and I think it’s authentic because I’m out there not trying to be anything but myself.”