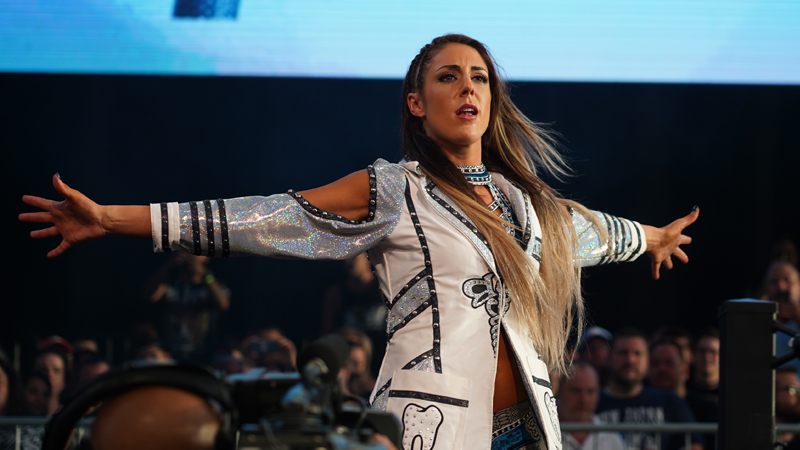 Dr. Britt Baker D.M.D. recently spoke with Wrestlezone’s Kevin Kellam about all things AEW leading into their new spot in the TNT lineup. While Baker has since challenged Riho for the title, she says she’s looking forward to working with more of the Joshi talent, noting Shida as someone who stands out.

“I think she just has this grit to her, she just has this appearance. She looks like a star, when she comes down the ramp, all eyes are on her and her wrestling. She’s strong, she’s fast, gritty,” Baker said, “that’s who I can not wait to get in the ring with. Aside from who I’m sure we’re going to talk about next.

Baker says things started slowly with AEW, but they were told from the start that this was something big and ‘All In’ gave her an idea of just how large-scale it would be. She also noted the challenges involved with bringing everything to a broadcast, noting “the pacing, working through the hard cam, and the fact that it’s live.” Baker said she thinks everyone is nervous for those same reasons, but it’s an exciting challenge at the same time.

What better way to enhance your career and enhance your skills and talents by just getting thrown to the fire? Here—go on live TV.

Baker says her dual careers as a wrestler and dentist does provide some transparency, but the fans are pretty respectful when they see her out of the ring and in the office. “There’s definitely a good amount of fans that come in who know who I am, but they’re always super professional about it. They’re not there to be a fan girl, fan guy. They’re still there to be a patient,” Baker said, “but it’s so admirable that they come in and say, ‘Oh, I’m a big fan of you.’ Because that gives me all the good feels that—they respect me as a dentist, as a provider, they trust me with their teeth, but also they love who I am as a character as well.”

Baker says training to be a wrestler was actually the hardest part of her two careers so far, because she didn’t have any free time. Baker says all of her time was spent working on both of her careers, but now that she graduated and has any easier schedule, it’s a lot more manageable.

Tonight’s AEW Dynamite taping takes place from Baker’s hometown of Pittsburgh, and earlier in the year at Starrcast III, Baker was asked what it meant to return home. Tonight’s show takes place at The Peterson Events Center and Baker said it’s like “worlds colliding” for her, noting that she spent plenty of time on campus while pursuing her dental school degree.

“That announcement for me was as exciting as these huge PPVs we’re doing. The Peterson Events Center where we’re running is right next to the dental school building where I graduated from. The “Pete”, what we call it, that’s where I used to study every single day on my exams,” Baker noted, “with things coming full circle, I’m so excited.”

Check out the full interview with Baker below:

Related: Britt Baker On Who Influenced Her Path To Wrestling, What She Wants To Accomplish Besides A Title Win