HomeNewsWrestlezone Retrospective: Why D-Generation X Is Critical To The Pro Wrestling Timeline

Wrestlezone Retrospective: Why D-Generation X Is Critical To The Pro Wrestling Timeline

Wrestlezone Retrospective: Why D-Generation X Is Critical To The Pro Wrestling Timeline 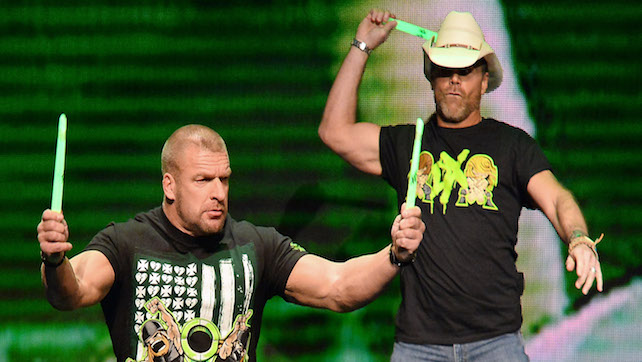 DX holds a very important place in professional wrestling history. It all began in August 1997, when Shawn Michaels had a match against Mankind. Now, Chyna and Triple H were already feuding with him and made their presence known. However, it was the return of Rick Rude that really saw the early stages of DX.

Rude wasn’t the “Ravishing” larger-than-life superstar that he was many years ago. He was a man dressed in a suit, carrying a briefcase and on a mission. They would all align together, and it was only a couple of months later during their feud against The Hart Foundation where the name really came to be.

Bret Hart called the foursome a group of “Degenerates”, something that Michaels and Triple H both agreed to being. Michaels said that he was tired of Generation-X getting a bad rap, and decided to name the group “D-Generation X”, a name that was eventually shortened to “DX” and has become iconic since.

In 2019, they became WWE Hall of Famers, with six members being inducted – Triple H, Shawn Michaels, Chyna, Billy Gunn, Road Dogg and X-Pac. It’s interesting that Rick Rude was left out, but they probably feel as though he was only around in the beginning. Moreover, he was inducted individually in 2017, and Shawn Michaels became only the first man since Ric Flair to become a 2-time WWE Hall of Famer (though Flair and Triple H will end up with multiple inductions over the years).

But what was it that made DX so influential? It’s important to note the timeline for this. It was 1997, the Monday Night Wars was in full swing, and WCW was dominating, while WWF needed a change. The nWo was essentially running the show for WWE’s rivals, and they needed something to combat that. Between 1996-1997, WWE began to slowly move away from the PG ratings and transitioning towards more adult-oriented content.

Even between Triple H and Shawn Michaels, it was something different, because the humor that they portrayed was crass, nonsensical yet hilarious. It represented WWF’s shift in attitude, something that would be cemented many months later in 1998. The first rendition of DX lasted till about WrestleMania 14, where ‘Stone Cold’ Steve Austin defeated Shawn Michaels to win the WWF Championship and become the face of the company.

It marked the beginning of the Attitude Era and the Austin Era. The following night after, Triple H assumed leadership of the faction. The truth was that Shawn Michaels was forced to retire due to a severe back injury. He wouldn’t return until 2002.

As for Triple H, he ended up recruiting X-Pac and The New Age Outlaws, who were tag team champions at the time. This would begin a very different phase for DX, whose popularity skyrocketed by the week. They eventually found themselves on the babyface side of the coin, and they had memorable feuds against The Corporation and even The Nation of Domination, the latter of whom they imitated in the most hilarious way possible.

More than anything, people often forget just how elite a stable DX is in retrospect, even counting Rick Rude. Think about each of them as individual superstars. Shawn Michaels was the greatest in-ring performer in WWE history. Triple H became a record-breaking world champion and is up there as one of the all-time greats too. Chyna would push the envelope and truly pave the way for women in WWE, even if the results were only seen years later. X-Pac is one of the all-time great Cruiserweight stars, while The New Age Outlaws had a great run as a tag team.

As for Rick Rude, his resumé really needs no introduction. Each member made the stable what it turned out to be. Even if you’re not a fan of the newer renditions of DX in 2006, 2007, 2009 and 2010, you have to give it to WWE because they still kept the DX name alive in front of a whole new generation of television audience.

They were degenerate. They were crazy. They were chaotic. They were controversial. They represented everything about the Attitude Era and what was so great about it. They were an integral part of WWE program and found their way to millions of homes across the world. They’ve been a part of so many memorable angles, moments and matches.

In many ways, there won’t be another stable like them. They’re as deserving as any stable can get in finding their spot in the WWE Hall of Fame.