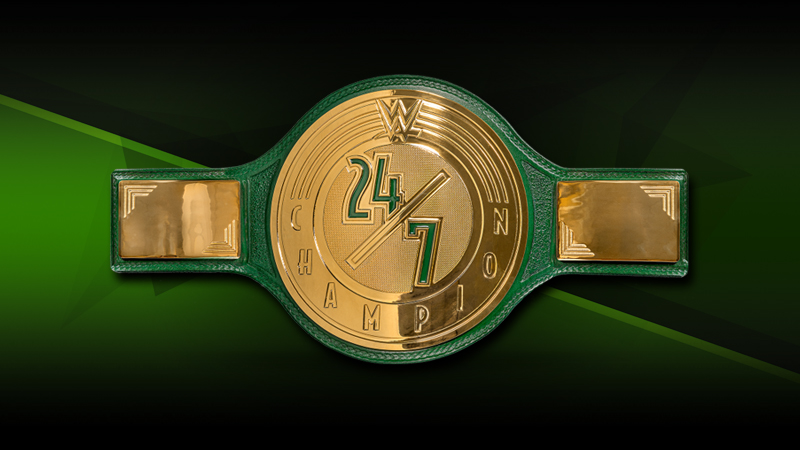 R-Truth ended the night with the title but he lost it initially to Slater, who pinned him after a neckbreaker. Truth beat Slater for the title, but Alexander then pinned him after a Lumbar Check, followed by EC3 winning after hitting the One Percenter. Truth then finally regained the title after Carmella caused a distraction by taking the title, and Truth rolled up EC3 to become an eight time 24/7 Champion.

Maverick was with his wife talking about going on their honeymoon before she said she needed to freshen up. She left, and Truth came out of hiding after a group chasing him ran by. Drake said he’s done with the title chase and wants to go on his honeymoon, but ended up blindsiding Truth by hitting him with his suitcase and pinned him.

Truth ended up interrupting Drake Maverick and Renee Michelle’s honeymoon celebration, sending in a referee as a bellhop before rolling Drake up and running off.

Mike won the title after the ‘mosh pit’ mixed tag team match on RAW that featured R-Truth and Carmella against Drake Maverick and Renee Michelle. Mike, one of the lumberjacks in the match, ended up getting the pin after everyone went after Truth. He ran to the backstage area (and still got chewed out by Maria), then Maria demanded Mike needed to get on the floor and let her win so her unborn child could have a champion as a parent. With the win, Maria became the first-ever pregnant WWE 24/7 Champion.

Mike won by pinning Maria at her OBGYN appointment. He went into the waiting area to celebrate and R-Truth and Carmella took off their disguises. Truth threw a fake baby at Mike and rolled him up for the win.

The Revival became the first co-champions with the title after beating R-Truth during their own match against the Lucha House Party. Truth interrupted the tag match after he was chased by a group of challengers, and then The Revival pinned him after the ref called for the bell to throw out the tag match. Truth ended up regaining the title after pinning Dawson during the commotion, then Truth ran backstage and got blasted with a guitar by Elias, who pinned him to become the new WWE 24/7 Champion.

Inside of Neyland Stadium in Knoxville, Tennessee. Truth won the title back outside of Thompson-Boling Arena.

Both title changes took place at a WWE live event in Manila, Phillippines

Both title changes took place at a WWE live event in Shanghai, China

Both title changes took place at a WWE live event in Honolulu, Hawaii

Carmella surprised Truth and rolled him up, but the title change was amicable as they still called each other friends after the ‘match’

Check out the highlights from the latest title change below: