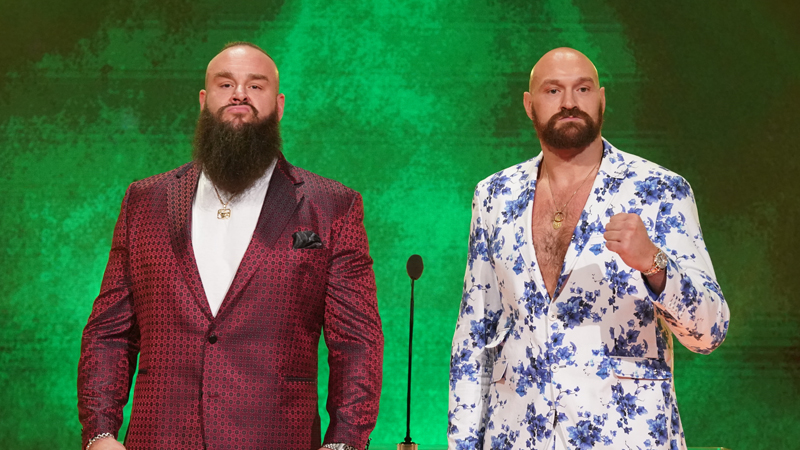 During Friday’s press conference that revealed that Tyson Fury and Braun Strowman would be going head-to-head at WWE Crown Jewel, Fury also stuck around for some interviews after the event. Speaking to the WWE following the conference, Fury was asked about his preparation for the upcoming match, and what went down during the conference.

You can check out some of Fury’s quotes from the interview below:

On the transition from boxing to wrestling:
It’s gonna be an amazing transition. I’m a natural entertainer. If you watch boxing then you know that I’m the biggest personality in the sport, so to come over here and get involved in WWE, it’s an excellent opportunity for me. I’m a quick learner. I’m like a duck in water when it comes to learning things, so hopefully I’ll learn some good moves and try them out on Braun.

His training:
I’ve been training at the Performance Center in Orlando for the last week. I’m gonna train there for another two weeks, go to London and train there. I take everything seriously. I didn’t come here to throw a few punches and Braun Strowman is knocked out. I came here to learn and appreciate what these guys do. I don’t take anything for granted, I work really hard at everything that I do.

His family’s reaction:
My son is 8-years-old. This is like a dream come true for him. He plays the WWE game on PlayStation every single day, and when he came backstage to see all the superstars it was like he was in a dream. To get to see his dad fight one of his heroes … and my daughter is a massive Braun Strowman fan.

.@Tyson_Fury is making the most out of his @WWE experience as he prepares for @BraunStrowman at #WWECrownJewel. pic.twitter.com/XdPoXzPJPe