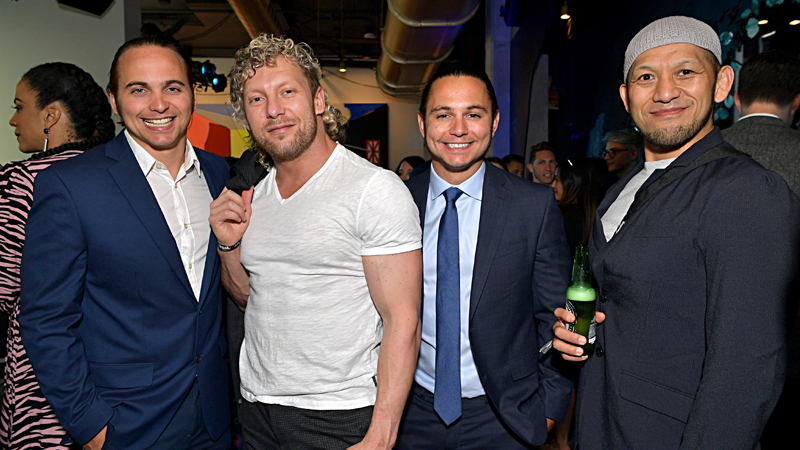 Cory Barker of TV Guide has a heavy feature piece on the upcoming battle between All Elite Wrestling and WWE as the two promotions make their presence known in primetime television at the beginning of October. Barker runs down all of the context for how the battle came to be and writes on WWE’s recent low ratings drop as well as the hill that AEW has to climb to carve their name in an ever-changing television viewing landscape. Some select sections of the article are below:

“The most compelling storyline of the fall TV season is happening inside the squared circle: A pair of pro wrestling companies are about to engage in an old-fashioned timeslot battle that is nearly two decades in the making.

“When TNT announced over the summer that upstart outfit All Elite Wrestling (AEW) would air a two-hour prime-time show every Wednesday beginning Oct. 2, it made huge news in the wrestling community. While there have always been alternatives to WWE’s massive global footprint, no competitor has had a major TV deal since TNT and TBS aired World Championship Wrestling (WCW) programming until 2001.

“It’s clear that AEW and TNT picked a timeslot that would prevent interruptions with the channel’s NBA coverage. But AEW also avoided WWE’s programs, the long-running Raw on USA Network and Smackdown, which is set to debut on Fox on Friday, Oct. 4 as part of a massive billion-dollar deal with the network. AEW talent, including announcer and WWE Hall of Famer Jim Ross, went out of their way to say that the company was not in direct competition with Vince McMahon’s “sports entertainment” behemoth.”

“But as WWE has grown its global brand and sanded off any remaining edges from the late ’90s heyday, many older fans have grown disaffected with its programming. Despite the Fox deal, WWE’s TV ratings have been on a steep decline, even relative to dips across cable. It’s gotten bad enough that the company stopped uploading so many TV segments to YouTube — where it has done well for years — in an effort to drive people back to live broadcasts.

“AEW, led by a core of performers who built a very modern version of fame through winking YouTube series and social media, offers a kind of independent authenticity that contrasts against the WWE monolith. They do a much better job of turning individual moments into memes and popular T-shirts. In an echo from the past, one of WWE’s biggest modern stars — Dean Ambrose — left the company earlier this year over what he described as a creatively stifling environment to join AEW where he performs as Jon Moxley. While the core AEW group has to-date only put on four very successful live events, the team has decades of experience working in wrestling and on TV for other, mostly smaller, companies.

“So McMahon isn’t taking any chances. He is doing what he’s always done — trying to kill the competition — even if it means borrowing a strategy from his old foe Ted Turner. The NXT show appeals to the older diehard audience that is likely to also enjoy AEW’s show. The first few live episodes of NXT will pull out all the stops with big matches and shocking moments. WWE will also surely use airtime on Fox to remind viewers of the new Wednesday offering on USA Network. It’s an all-out assault.

“The biggest question isn’t whether or not AEW can survive the assault. It’s whether or not the head-to-head battle can have even close to the same effect as it did in the late ’90s. Timeslots barely matter as they did even five years ago, let alone 15. But real competition did wonders for pro wrestling, USA Network, and TNT before; there’s no reason it can’t happen again.

“All Elite Wrestling premieres Wednesday, Oct. 2 at 8/7c on TNT.”