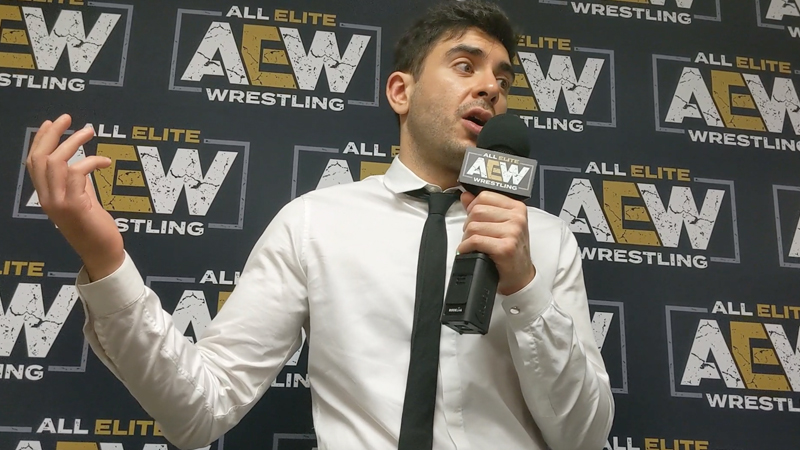 Tony Khan was the guest of an extensive interview with PWTorch’s Wade Keller on his Wade Keller Pro Wrestling Podcast and the AEW President covered plenty of topics. He was an open book for 2.5 hour as Wade asked him a variety of questions ranging from ratings expectations, bumps on the road so far, his wrestling philosophy and so much more.

Tony Khan on if he believes AEW Dynamite will meet TNT’s rating expectations:

On the criticism that came from having too much of a lighter tone on the AEW pre-show matches:

“I will concede that is a fair point and it doesn’t really make as much sense to have an undercard, especially on what is the free preview with the Buy-In shows…”

“To have that much comedy on the undercard when the main matches are so serious and if you’re trying to show people what the tones of the show are, you’re absolutely right and that probably speaks to some of the points that I was making about not just the Casino Battle Royale, but also like Fyter Fest is like one of the best shows that anybody did all year and the first match of the pre-show is fantastic…”

“When we go to the CEO Festival I warn people that maybe once a year that CEO Festival you might see that kind of nepotism. Now I don’t know what you’ll see with in the future at CEO, but I do know that like non-wrestler matches like that are not something I really want to do and it was a very unique circumstance and if people knew the story of how the Fyter Fest became the Fyter Fest, from what it was last year, I think people would appreciate, though I definitely understood that we needed to beef this up and turn it into like a spectacle so it’s not just AEW plus CEO, if that makes sense.”

On if he, Cody, The Young Bucks and Kenny will move away from “Being The Elite”:

“Being The Elite is such an important, like integral part of our DNA and what got these guys over and what made this all happen and how we all came together. So I guess my thing is on Being The Elite, no. I don’t want to move away from it at all. We need that because that’s where people go to see that. And in my opinion, can’t we do good sketch comedy on YouTube and good wrestling on our wrestling show instead of trying to do bad sketch comedy on our wrestling show and then you know, not being able to offer the good wrestling?

“I told people very early on with our shows that what you’re going to see on our TV and PPVs are going to very different than Being The Elite and it’s by design because that’s where you go to get it, is Being The Elite. Instead of us doing a lot of sketches. The way in being the elite’s done is totally different than my philosophy of producing wrestling television which is I don’t believe the invisible camera. You’ve never seen the invisible camera on our shows.