HomeNewsTommaso Ciampa Says He’s Not Wrestling, But Will Be At NXT Tonight; Posts New Teaser Video

Tommaso Ciampa Says He’s Not Wrestling, But Will Be At NXT Tonight; Posts New Teaser Video

Tommaso Ciampa Says He’s Not Wrestling, But Will Be At NXT Tonight; Posts New Teaser Video 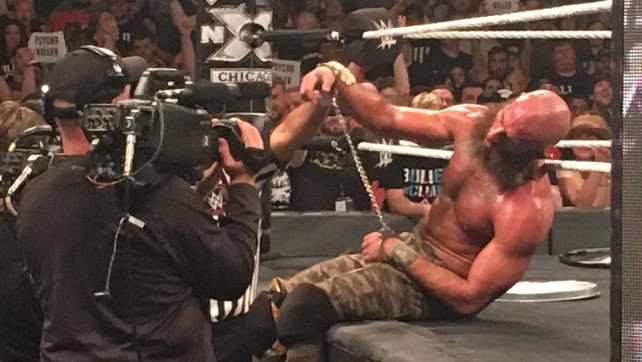 Tommaso Ciampa was the special guest on “NXT Hot Tag with Izzy” and the former NXT Champion gave the superfan an exclusive update on his health status. While Ciampa won’t be making an in-ring return tonight as NXT debuts on the USA Network, he did say that he’ll eventually be able to wrestle again.

“It’s big and there’s a lot of rumors and speculation of what my role’s going to be. Breaking news on the Izzy Show here, right? I’ve been told I will be coming back to a wrestling ring. I’ve been told I will eventually be able to wrestle again and the sad part is, no I’m not cleared yet, guys. I mean it just is what it is so I will be there September 18, I will be there the 25th, I’ll be there every time going forward, I just won’t be out in front of the crowd until this [points at neck] allows me too.”

On the eve before @WWENXT goes live on the @USA_Network the NXT Hot Tag with Izzy had the opportunity to do an exclusive interview with @NXTCiampa …..

“I’ve been told I will be coming back to a wrestling ring”!!!!! pic.twitter.com/7V4iGyzEaM

In addition to the interview, Ciampa just shared the following teaser trailer on Twitter:

Ciampa had a humorous Tweet yesterday regarding his status yesterday as well but since deleted it. It stated the following:

So, I called and asked my surgeon to confirm. He laughed at me. And said (kind of in an Allen Iverson voice) “the internet, we talking about the internet”.