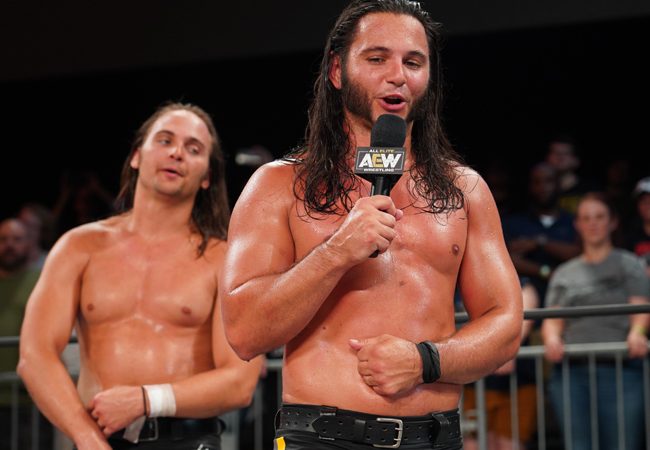 This week’s post Full Gear episode of Being The Elite started off with yet another moment from after an AEW taping. While they were throwing shirts into the audience, Cody and The Bucks bring a fan into the ring to celebrate his birthday. After getting a birthday chant from the crowd and posing for a few photos, the fan pins Brandon Cutler in the middle of the ring. A cool moment to be sure.

Then, the Bucks talk about their eventful last few weeks, Matt Jackson talks to his brother Nick about being scared of being in the airport. They then parody WWE’s Crown Jewel flight situation, including excuses about mechanical failure and claims that they’ll “never see their kids again.”

Another segment involves the Rock and Roll Express hitting the spray tan after talking with Kenny Omega, only to suddenly turn into The Young Bucks. It’s great to see the two veterans interact with talent both here and on NWA Powerrr. This cascades right into the Bucks watching Kenny perform in his Lights Out match backstage, and their hesitant reaction matched many in the fanbase.

Other segments involve SCU getting a “big pop,” more angles from Full Gear, and The Librarian finding a friend backstage. You can find the full episode in the video embedded below: