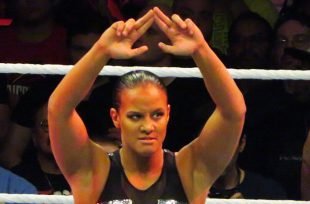 On WWE RAW this week, the Kabuki Warriors continued their rivalry with WWE RAW Women’s Champion Becky Lynch and Charlotte Flair. The teams have been feuding for weeks since Kairi Sane pinned Lynch after Asuka spit mist in her face. The distraction of Shayna Baszler and Bayley brawling at ringside allowed the Kabuki Warriors to win the match and retain the titles.

Before the match, Lynch told any and all challengers to bring it. She said the only thing she fears is not being the best. Lynch said she wanted to become Becky Two Belts again, which prompted the beginning of this WWE Women’s Tag Team Championship match. All four women showcased why they’re amongst the best in WWE’s women’s division. Lynch gained the upper hand on Sane. Chops had no effect on Flair. A shoulder block floored Sane. A stiff elbow from Flair rocked Asuka.

NXT Champion Shayna Baszler came to ringside and distracted Flair. The WWE Women’s Tag Team Champions took control of the match. Flair rallied and tagged Lynch, who cleared house. Baszler got on the apron but WWE SmackDown Women’s Champion Bayley fought with her. The distraction allowed Asuka roll up Lynch to win the match to retain the titles.

After the match, Bayley attacked Lynch and threw her into the barricade.