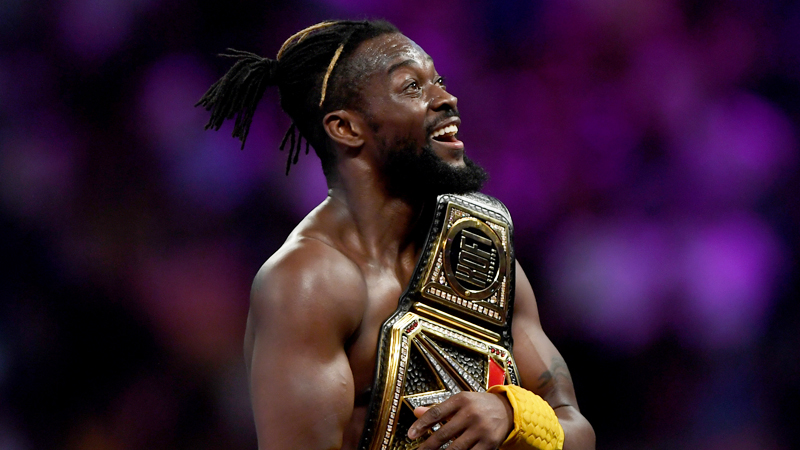 On October 4th, 2019 on SmackDown’s FOX Premiere, the WWE Universe was heartbroken when Kofi Kingston‘s dream run as WWE Champion came to a crashing halt in just ten seconds. The fact that it was Brock Lesnar who did it didn’t help and to add fuel to the fire, he was simply brushed away because of the attention that Cain Velasquez‘s debut got.

Granted, the debut did soften the blow a bit, but when looking at it, a dream WWE title run that was 10-years in the making ending in ten seconds didn’t seem to do any justice to a superstar like Kingston. For over a decade, Kingston grinded and was always one of the hardest workers, never being one to complain about his spot.

Instead, he climbed the top the long and hard way – by scratching and clawing with all his blood, sweat and tears. On many occasions, he was successful but he never really reached the level that he wanted to. In the eyes of WWE fans, Kingston had all the tools to do it- he just needed an opportunity.

February 2019 saw the beginning of what may be one of the most beautiful WWE stories this year. A man who was never looked upon as World Championship material was given one opportunity and he gave it everything he had to reach the mountaintop. On a fine night in New York City at WrestleMania 35, Kofi Kingston achieved his dreams by becoming the WWE Champion in front of over 80,000 people.

Winning the Championship is one thing, but to be the champion and defend the title week after week is a whole other ordeal. The honeymoon phase isn’t that long but even then, it was always surreal to see Kofi Kingston become WWE Champion. Since 2009 was the year that was supposed to be his breakout, it took about 10 years to come full circle.

For many, Kofi Kingston’s reign as WWE Champion didn’t impress. It probably had to do with the fact that his opponents weren’t ones with a lot of momentum and in the case of his final feud against Randy Orton, the story didn’t close out with a great match as many had hoped. Even through this, Kingston remained a strong and popular champion and it was clear that that the loud voice of the vocal minority wasn’t necessarily how the larger audience felt.

For most, Kingston was still the WWE Champion and he was a great one at that. Sure, many superstars in the past have been hotter when chasing the title than holding it. While WWE certainly can be blamed for the way his title reign ended, it can’t be denied that they handled him as a very strong champion.

In fact, since 2017, every single WWE title reign has crossed 100 days and we have only had 4 title reigns as a whole before Brock Lesnar. That’s quite impressive and Kingston proved to be a legitimate champion and main eventer. Not a single person could deny his credibility as a champion and the worry now is that he will be treated similarly to Jinder Mahal after losing the WWE title.

Sure, Mahal had a few good months after where he challenged for and briefly became WWE Champion, but after that, he was instantly demoted back to his lower card status. Rest assured, the same won’t happen to Kofi Kingston. For one, he was never a low-carder. He was a midcarder and top-tier tag team wrestler who holds the record of being the longest-reigning tag team champion in WWE history.

This run was instrumental but it was always going to come to an end. But that doesn’t mean that Kingston will be demoted straight away. He has proven his worth as a main eventer and WWE knows that he can step up when they need him to. For all we know, this may have just been the first of a few more World Championship reigns.