HomeNewsThe Bouncers On Proving Themselves As A Legitimate Team, The Current Pro Wrestling Landscape Creating Opportunity 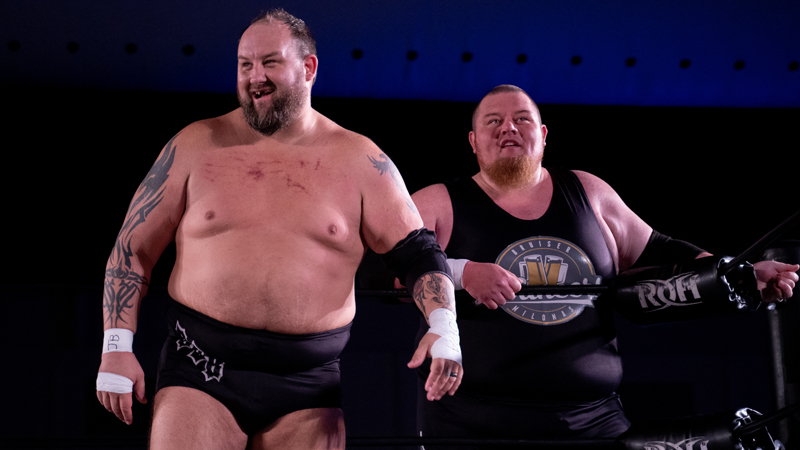 The Bouncers are on a mission to prove they’re a formidable tag team, and they will start by showing the world what they’re all about this weekend in Las Vegas.

Wrestlezone’s Kevin Kellam had a chance to chat with both of The Bouncers (Brian Milonas and The Beer City Bruiser) before they take on Silas Young and Vinny Marseglia at ROH Death Before Dishonor tomorrow night in a Bar Room Brawl. The duo talked about where they got The Bouncers name, with Beer City Bruiser noting that they didn’t want to just be seen as two guys thrown together, and more like enforcers for ROH.

“When we started tagging together we didn’t want to just be two guys that just tagged and used our individual names. So somebody told us, ‘hey you guys need a tag team name’ and we tossed some around a little bit and then one day,” Bruiser said, “I think I just kind of tapped Milonas on the shoulder and said, ‘Hey man, what about Bouncers? Like everybody’s gotta come through us to get into Ring Of Honor. We’re kind of like the bouncers of Ring Of Honor,’ and he liked it and it stuck.”

Milonas echoed his partner’s feelings about how they want to be presented, telling Kellam they want to prove that they are a legitimate tag team, and they’ll have a chance to prove it in Las Vegas. “We firmly believe we are one of the best tag teams on the face of the planet and we’re serious contenders for the ROH World Tag Team Titles.” Milonas said. “We’re out to show the world, to prove a point not only to Silas and Vincent, but to prove a point to the world at Sam’s Town.”

Milonas said the current pro wrestling landscape provides a lot of opportunity for talent, and fans shouldn’t get hung up on the talk about Ring Of Honor’s demise. He says this is an exciting time for wrestlers, and ROH still has many of their franchise names in Jay Lethal and the Briscoes, so it’s not a point of contention in their eyes. “When you talk of a company like Ring Of Honor and in this company’s history—how many times has the death certificate been written by the internet wrestling community out there? But, it’s exciting cause for guys like us and for so many others it presents opportunity. And what a better time,” Milonas said, “you can’t ask for a better time to be a pro wrestler in 2019 right now. It’s a question we get asked a lot, especially since the guys from The Elite left and went and started AEW which is a great thing as well, but it’s one of those things that I know and I can comfortably speak for The Bruiser too on this is that we looked around and Jay Lethal is still there. We looked in the other direction and The Briscoe Brothers are still there, and man, that’s the heart and soul of that locker room and that company. As long as those guys are there, to me all is right in the world.”

True to their name and gimmick, Milonas said fans will frequently offer them beers before shows, to the point where they’ll have to turn it down so they can prepare for their matches. “I gotta tell you, it’s amazing how many drinks we do get for free, especially doing meet and greets and stuff.” Milonas said. “There have been times where we literally have to turn down alcohol because it’s 6:00 and we’re meeting fans and signing autographs and you know, we still have to go wrestle and we can’t be eight, ten beers deep going to wrestle.”

When asked if they’d ever consider just creating their own Bouncers’ craft beer, he said that they are “working on it as we speak.”

Ring Of Honor’s Death Before Dishonor takes place at Sam’s Town in Las Vegas tomorrow night; the event will be available to watch on ROH’s HonorClub service.