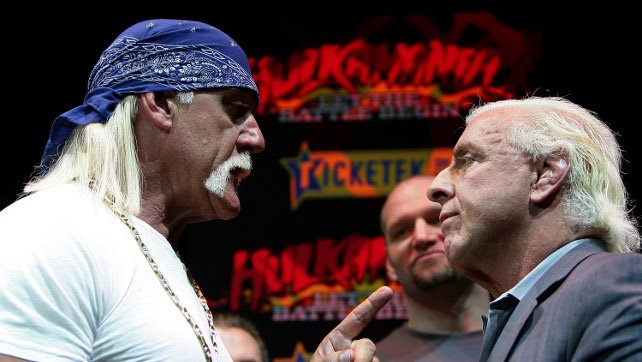 On the Season Premiere of Monday Night RAW on September 30th, 2019, fans were given a scare when Hulk Hogan and Ric Flair teased a match against each other, presumably for Saudi Arabia. Thankfully, that didn’t happen and as a result, we will be having Team Hogan vs Team Flair at WWE Crown Jewel 2019.

Regardless, many are wondering why this match is happening and we have a few theories about the Crown Jewel match-up:

#1.) It’s the best way to utilize the legends

Saudi Arabia shows have now gotten the notorious reputation of being glorified house shows that make more money than WrestleMania at times. Due to the sheer amount of money that there is, there’s a lot of demand from the Saudi officials to bring over legends of the past. We’ve seen this on multiple occasions and we’ve seen some really painful matches of once-great men who were clearly far past their prime when they wrestled.

Knowing this, WWE probably thought of the idea where the legends can still be present in a significant role while getting involved physically to the most minimal extent

Crown Jewel needs a main event and now it’s got it. Given that it’s the second PPV in October alone, WWE is clearly not going to stack up the card with dream matches. Sure, there will be a few good ones, but in all likeliness, they probably don’t have as many big names as they would have hoped like last year and for Super ShowDown.

Having a multi-man Elimination match is a good way to have the main event set without putting in all too much effort. Plus, it’ll be fast-paced enough where it can satisfy fans and the crowd.

Another thing that is perfectly clear is that this is quite the star-studded match-up. It already involves four major stars and more big names will be added to it. Having a star-studded match involving legends as well is a huge boost for Crown Jewel and will instantly draw attention. There are few things that WWE fans like more than matches that are completely star-studded.

Moreover, it gives a much bigger sense of importance to the match even if there aren’t necessarily many storyline implications to the whole thing.

#4.) To spin-off into different storylines later on

To be honest, Saudi Arabia shows are really just special events in between. If you notice, WWE doesn’t have heavy storyline-type matches on the Saudi PPVs, but they could use it to begin more storylines. Since there are going to be atleast 10 superstars in the match, it can be a propeller for a few storylines to spin-off of it.

Ultimately, it all boils down to whether WWE deems the PPV important enough to build more storylines. It’s going to be interesting to see how they deal with it, especially given that they have Survivor Series the following month and it’s supposed to be about brand wars.

Are you on Team Hogan or Team Flair? Voice your opinions in the comments below and how you think the match will turn out!