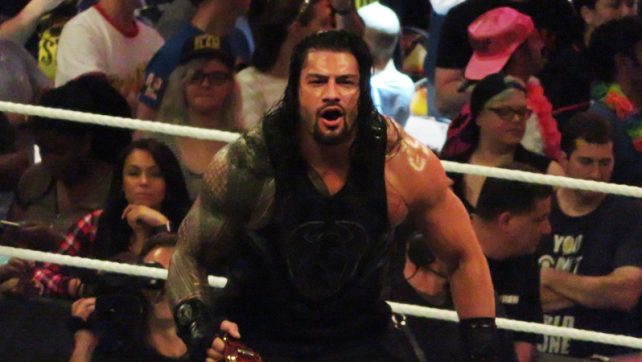 2015 was a very interesting year for WWE programming. In terms of quality, it was far from the best, as 2013 and 2014 had been two back-to-back fantastic years. But the biggest story of that year was WWE’s attempt to push a new top star in Roman Reigns but failing miserably to do so. He was poised to be John Cena‘s successor and had all the tools for it, as he was marketable, had a great look, appealed to the younger demographic and would move good merchandise as well.

There was one major problem – he wasn’t even close to being ready for that spot. In retrospect, now that Reigns gets cheered as a babyface, it’s evident that a lot of what happened to him wasn’t his fault. It was fans taking out their frustration on the company and constantly enraged by the fact that the company tried to force them to cheer for someone they simply didn’t want to.

Throughout the year, fans would beg and plead for Reigns to turn heel but the company never pulled the trigger. It should come as no surprise that they changed the plans for his coronation at WrestleMania 31 and gave that spot to Seth Rollins, who became the first man in history to cash in the Money in the Bank briefcase at the grandest stage of them all.

As a result, they managed to get the title off the part-time superstar Lesnar while keeping fans happy and also protecting The Beast Incarnate. It was Seth Rollins who would have the best year of his career up to that point as he reached a whole new level as a heel champion. The situation between Reigns and Rollins was so polar opposite that it’s incredible to look back on now.

Rollins was the cowardly heel, who in the eyes of fans, deserved to be the champion and was the best part of WWE programming. Not only was he entertaining but his character work was off the charts and he was among the best in-ring workers on the planet at that point. It didn’t help that the overall quality of WWE TV was average, but Seth Rollins stood out as the best part of it all.

Reigns, on the other hand, kept struggling. Once he was taken out of the title picture, WWE tried to ease him and continue his run as a babyface and while he had a very entertaining feud with Bray Wyatt, his popularity didn’t grow – it only continued to deteriorate. However, the night after Hell in a Cell when he ended his feud with Wyatt, he confronted Seth Rollins, establishing himself as his next challenger. In an odd situation, Reigns was cheered as though he was the biggest babyface in the world.

He cemented himself as a contender after defeating three other men that same night and was all set to face Seth Rollins for the WWE title, only for Rollins to suffer a devastating injury to his ACL and MCL. He was forced to vacate the title and undergo surgery – one that would keep him out from November 2015 until May 2016.

As a result, Reigns had a choice – either join the Authority and become Triple H‘s Champion (something that fans desperately wanted) or fall back in the line. Since he was the top face at the time, he chose the latter and had to earn his way back to the WWE Championship. That build to Survivor Series was a bit unconventional in the sense that there was no focus on any actual Elimination Match. If anything, they added a few throwaway 5-on-5 matches in the last minute, but the entire PPV seemed centered around Roman Reigns.

Of course, it led to an inevitable face vs face clash against his Shield Brother Dean Ambrose, the one who fans desperately wanted to see win the title. However, that was realistically never going to happen and Reigns, in the Survivor Series main event, won his first WWE Championship by defeating a very game Dean Ambrose.

The confetti poured on in celebration as fans were underwhelmed, only for Sheamus, the Money in the Bank holder, to attack him and cash in. He became WWE Champion in what was also a very underwhelming moment. His reign would last all but 22 days before Reigns gained it back and it’s interesting to look back at that Survivor Series and what transpired. It certainly felt like WWE was on the cusp of something special and to their credit, they would spend the next year having incredible programming with fresh faces.

Although Reigns’ popularity wouldn’t skyrocket anytime soon after that, the overall look of things in retrospect puts into perspective how bizarre circumstances would be that WWE centered an entire PPV around one superstar.