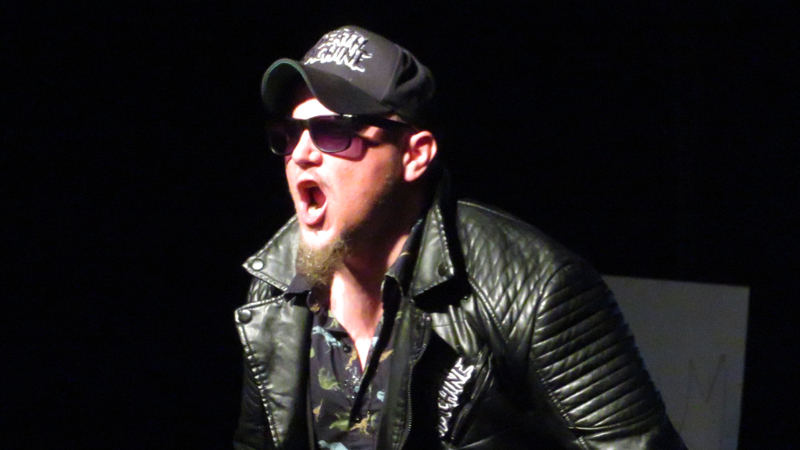 In a talk with IMPACT’s new home of AXS TV, Sami Callihan switched topics from OvE and Pro Wrestling to the spooky season. Considering some of his past gimmicks and some of these answers, the man knows his Haloween.

How has Horror helped shape your in-ring persona?

I’m a huge Universal Monsters fan. Dracula, Frankenstein, Creature From The Black Lagoon, Wolf-Man. I wanted to be a character like that was completely over the top. But through time, that had to evolve. It became a more Devil’s Rejects, House Of 1,000 Corpses-type character, and then it went from there to an American Psycho-style character. Right now, I’ve just kind of become myself, which is this crazy dude from Ohio that is enthralled with Horror Movies and believes Horror Movies are real, and it’s not so much of a character anymore.

On his love for Ghostbusters:

Ghostbusters was absolutely my favorite thing as a child, outside of Horror. I remember when people would ask ‘What do you want to be when you get older?’, it was either pro wrestler or Ghostbuster. Then I realized Ghostbuster wasn’t a real occupation, so I went with pro wrestler.

What is the first Horror Movie you can remember watching?

I have to say the first Nightmare On Elm Street. It’s still one of my favorite Horror Movies of all time. I remember seeing it when I was really little. Watching Horror movies was one of my first memories as a child, because my family were big Horror Movie fans, so they raised me to be such. They were always the kind of family that was like, ‘This is fake, this isn’t real.’ So, I wasn’t afraid of it when I was younger.

What is your favorite type of Horror Movie?

Which Horror Villain would you definitely not want to meet in the ring?

Michael Myers. He was another one that kind of scared me when I was younger. He’s an unstoppable killing force. He gets one vision of you and he obsesses until he either kills you or you kill him. He’s a hard one to take down. Michael Myers doesn’t really have a weakness at the end of the day. If I’m picking a tag-team partner, as far as Horror goes, I’m 100% going with Michael Myers. I already pretty much tag with Michael Myers in fellow oVe member Madman Fulton. But to actually have the real Michael… that might be another level of craziness.

How do you plan to celebrate Halloween this year?

I haven’t really been able to celebrate Halloween to its full potential the last couple years with my schedule. But, if I’m able to be home on Halloween this year, I’m probably going to be something from the Rob Zombie franchise, because I’m such a big fan of his work and the way his characters look and have evolved over the years.

In addition, Sami weighed in on the value of Candy Corn, and our own Bill Prichard wholeheartedly agreed with his answer.

.@TheSamiCallihan did a Halloween themed Q&A for #IMPACTonAXSTV, and I can't agree more.