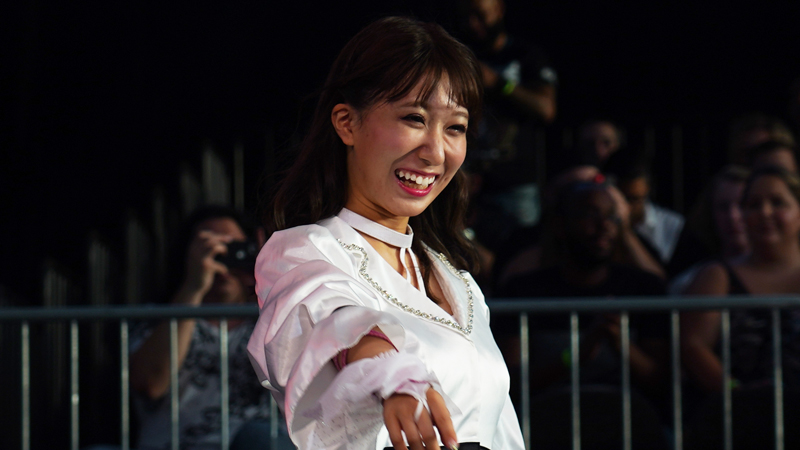 As advertised, All Elite Wrestling crowned their first-ever Women’s Champion during the debut episode of AEW Dynamite. The match was between Nyla Rose and Riho, who both earned their title shot at previous events. The de facto No. 1 contender, Britt Baker, joined the commentary crew for the match.

As one would expect, the size disparity between the two competitors played a large factor as Rose was twice the size of the much smaller Riho. Rose’s power advantage became evident early, but Riho’s heart showed that this wouldn’t be a walkover. The Japanese wrestler also had a speed advantage as she was able to outmaneuver her opponent in spots.

Rose’s temper almost got the better of her as she nearly got disqualified for using a chair during the match, but the referee got her to put down the weapon. She then put down a number of chairs and placed Riho’s body on it, she went to dive on her, but the Japanese wrestler rolled away in time for Rose to take the damage. This was Riho’s big chance as she finally had the momentum in her favor.

. @NylaRoseBeast went high risk and it didn't pay off! Are you watching #AEWDynamite? pic.twitter.com/sFeQycrpOK

It didn’t last for long, though, as Rose’s sheer size started to tire out the smaller wrestler. Riho kept battling back, though, but every one hit from Rose did more damage than five from her opponent. Rose then landed a death valley driver that looked to end the match, but Riho managed to kick out. The fans were clearly behind Riho at this point, and Rose went up to the top rope to try to finish her off. However, Riho got up and started viciously punching her opponent and started to look for a suplex of her own, which she got off. This led to a very close two count. A pair of double knees later and Riho successfully won the belt!

After the match, Michael Nakazawa came into the ring to interview Riho, and was attacked by Rose. She went to attack Riho, but Kenny Omega made the save.