HomeNewsPump The Brakes On Paranoia: AEW Dynamite Brings Their Own ‘Boom Period’ To Fans In Attendance

Pump The Brakes On Paranoia: AEW Dynamite Brings Their Own ‘Boom Period’ To Fans In Attendance

Pump The Brakes On Paranoia: AEW Dynamite Brings Their Own ‘Boom Period’ To Fans In Attendance 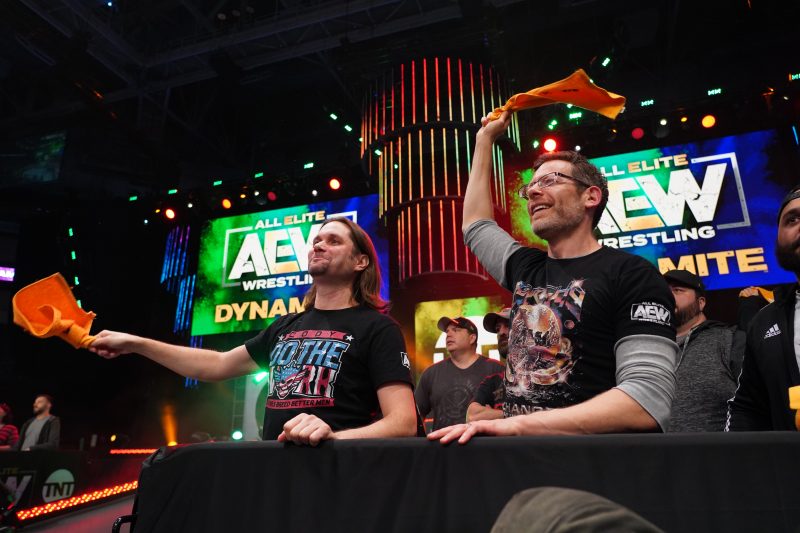 With so much accessibility and many ways there are for the normal “Joe wrestling fan” to connect with the stars of today, I cannot shake how black and white people are when it comes to expressing their beliefs on whatever subject they fancy. We know this all too well in the mad, mad, mad, mad world of wrestling media; from the buzz-worthy soapbox topics of intergender wrestling to the “either-or” stances regarding a talent like Marko Stunt, fans, wrestlers and personalities nearly feel obligated to pick a side on subject. What’s wild about it all, life (and wrestling in general) stews in plenty of grey area. As “one-way street” social media fanatics paint the world to be, life just doesn’t work like that and nor does it when it comes to viewing wrestling. You don’t have to side pick whatsoever (even though that is kind of fun to do), everything is at your streaming or DVR digits. We as humans just enjoy bitching and moaning, even when life is pretty good, and right now, life for wrestling fans is pretty damn good.

A big subject socially for wrestling is if there will or won’t be a wrestling “boom period” going down. My thought is simple: pump the breaks on the paranoia. Give it time. Fox is facing the fierce reality that WWE doesn’t know what the hell they’re doing when it comes to presenting a television product that implores viewers to tune in week after week, and perhaps from a “mainstream” perspective, “Joe Football On Fox Fan” may think wrestling isn’t as cool as it once was, but the brother of notorious wrestling poet Lanny Poffo once put it pointedly, “The cream rises to the top,” and it will, with everything.

All Elite Wrestling has been spotlighted as the new mainstream alternative, and if you dabble in the details, I very much believe the company knows its body in terms direction and means of presentation. Part of that is maintaining a connection with the fanbase which was evident during (and after) their tapings of AEW Dynamite in Pittsburgh.

Talent during the show literally broke down the “fourth wall” barrier between fan and star, not just from the Cody “dippin’ the dots” of Jericho perspective, but talent took moments to acknowledge the fans’ presence and really embraced that ideal once the tapes weren’t rolling. The big proponent of that? Cody Rhodes. He came out to huge ovation for his televised segment and instead of AEW pulling a WWE where they dim the lights and an individual stands almost frozen in place, waiting for their music to strike back up again, Cody took a little moment of improv to tell the fans that they were on commercial break, and asked if anybody had a joke to share. Burnard The Business bear got some love, and the fans’ intelligence wasn’t insulted but appreciated.

The appreciation was very much shown after both Dynamite and Dark were over as the crowd made its way to the exit. Cody & Nick Jackson came out as Darby Allin (who was a participant in the last Dark match of the night) took a solid thirteen minutes to treat the fans to a literal stripping of merch (mostly off of a sheepish Matt Jackson) and assorted other items ringside. The fans ate this up and Cody—even MJF, too—took part in the impromptu party.

Something else you don’t get is a two-hour with change wrestling show. Being so accustomed to three-hour-plus “extravaganzas” that feels every bit of a marathon instead of an experience the two-hour structure gives attendees the appropriate endorphin dose without being burnt out from kicks, flips and false finishes. Characters, moments and presentation seem to mean a little more with such a shorter time window, particularly because you don’t get a taste of everything. And even though you do have that unique fan-to-talent interaction, the mere fact that you don’t get everything still cultivates that built-in allure of star power.

And that doesn’t mean AEW can’t improve on such separation of star and fan. I’m more for the mystique of the stars, but with Twitter, Instagram and what have you, there’s the opportunity to humanize oneself and the risk of laying in the mud with attention-seeking swine of social media. It can be a risk, a reward or both, but it’s all grey and AEW continues stands in that fog with a bright lantern.

RELATED: Chris Jericho Texts Kevin Nash, Explains Why He Had An AEW Mic