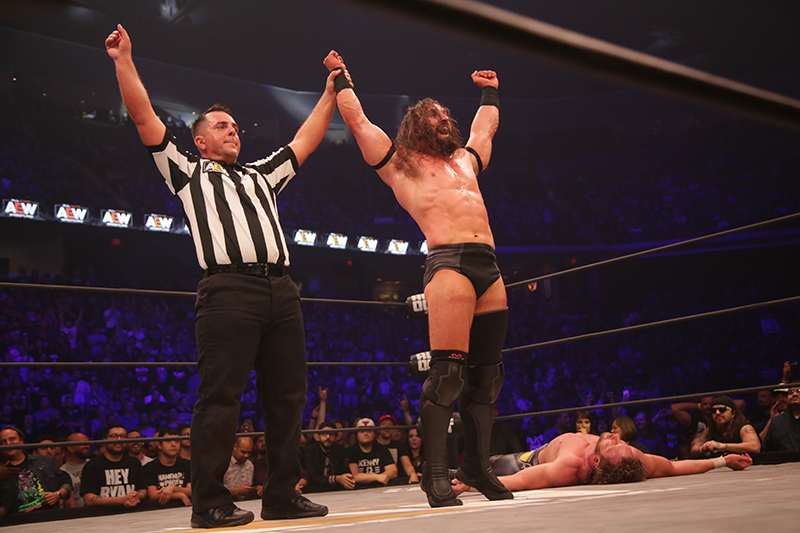 “The Bastard” PAC returned for his second official All Elite Wrestling match tonight. The former WWE Cruiserweight Champion was coming off a big win over Kenny Omega at All In. He was going up against Adam “Hangman” Page, who was coming off his championship defeat against Chris Jericho. Both men had a lot on the line.

Can @BASTARDPAC keep his momentum going on our debut episode of #AEWDynamite? pic.twitter.com/DsDLjnE6bh

This was actually a rematch, as the two fought in England to a DQ finish prior to AEW Double or Nothing. The two showed their familiarity with one another with a quick start as the action was explosive and early between the two wrestlers. However, PAC seemed to be one step ahead of his larger foe as he was able to hit some impressive springboard maneuvers and showed off his high-flying arsenal.

It was meant to happen at #AEWDoubleorNothing. But, we're getting it now on #AEWDynamite on @TNTDrama pic.twitter.com/HgDXV9aGzU

Page was able to battle back into the match and hit a huge flapjack for a near fall, but PAC wouldn’t go down for the count. Page even hit a huge moonsault to the outside, but PAC reversed momentum by landing a low blow that Earl Hebner didn’t see. One Blackout into a Brutalizer over and Page was forced to submit.