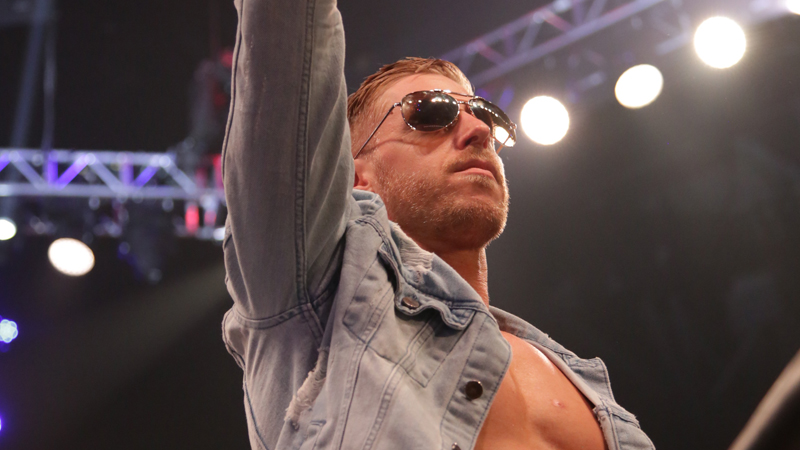 The latest Being The Elite is up and this week’s episode gets pretty cool as Orange Cassidy has a strong presence in the episode. Not only that, but Jay & Silent Bob make a cameo with Jurassic Express and we get a further look into Kenny’s psyche pre-main event match at the debut episode of Dynamite.

The episode starts off with the Bucks and Omega in the locker room together before their three-man tag. Kenny seemed still stuck in his own head as he gnawed on a power bar as Matt and Nick are confused at his shoehorning of the phrase “just getting started” into the conversation. Kenny snickers to himself as the brothers walk off.

Next up, The Bucks are outside a production truck as they talk of all the work they have to get done before Dynamite debuts on TNT later that evening. This is all said under a very red filter as they try to take a moment to plug their “homemade” Young Bucks tee, which happens to be very hard to see.

We get a clip and snip interview with Orange Cassidy who as always is very thorough in his responses before we see him sitting next to The Bucks in the locker room. Matt and Nick think Cassidy is catching some “freshly squeezed Z’s” but Cassidy is thankful for the healthy conversation with the EVPs before getting up and exiting.

Other clips show Marko Stunt trying to assimilate with Frankie Kazarian backstage during workout sessions and Leva Bates being ecstatic in front of Washington DC’s Library of Congress.

New merch is available for MJF as he becomes considerate for us poor people’s warmth with a special Burberry-esque scarf avaible for the fans on Pro Wrestling Tees. Nick Jackson thinks it’s a great merch move and MJF thanks him for the compliment but not his breath.

Speaking of healthy conversations, Silent Bob and Jungle Boy are really chatting it up before Jay and Luchasaurus show up to join in. LS lifts Jungle Boy on his shoulders and Bob tries to do the same for Jay, but his shoulder strength comes across a little prehistoric.

We’re giving a look backstage as Kenny, Matt and Nick are both in Gorilla enjoying the AEW Women’s Championship match. Omega is super-invested in the action as we hear the bell ring for Riho’s victory and the boys are shown celebrating.

We cut to The Bucks and Dustin Rhodes after being attacked by Chris Jericho’s new crew who immediately confront Adam Page backstage. They question where was he during their time of need and as the brothers walk off, Dustin can’t help but agree with Matt & Nick. Adam promises he’ll make it up to Dustin as we see that Page and “The Natural” will be facing Sammy Guevara and Chris Jericho this week on Dynamite as it explodes from Boston, MA.

We get one last segment with Kenny, Matt & Nick as Omega admits that his head isn’t in the right place. Matt says that they aren’t mad at Kenny, but they’re disappointed in him and we’re left seeing Omega sit despondent as the episode ends.

RELATED: SCU On Their Jobs As Mentors In AEW, The Significance Of Kevin Smith’s Presence At ‘Dynamite’