HomeNewsNyla Rose On Being Identified As Transgender Instead Of Just ‘Wrestler’, Jon Moxley On Finding AEW ‘Almost By Accident’

Nyla Rose On Being Identified As Transgender Instead Of Just ‘Wrestler’, Jon Moxley On Finding AEW ‘Almost By Accident’

Nyla Rose On Being Identified As Transgender Instead Of Just ‘Wrestler’, Jon Moxley On Finding AEW ‘Almost By Accident’ 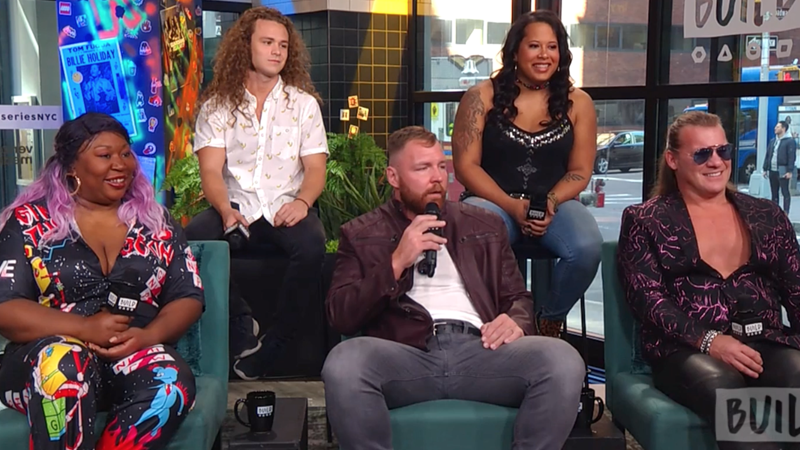 BUILD had several members of the All Elite Wrestling roster on a livestream panel this afternoon; Chris Jericho, Jon Moxley, Awesome Kong, Jungle Boy and Nyla Rose were featured taking various questions from the host and audience members. During the panel, Moxley was asked about leaving WWE and going to AEW, which he says he almost sabotaged himself because he would have been happy working on a smaller scale out of the spotlight.

“Months and months and months ago, I was going to leave where I was before. It’s funny because I attempted to throw everything away. Money, fame, any care that I get recognized on the street for the rest of my life. That’s not important to why I do this.” Moxley said. “Wrestling in front of 15,000 people at the top of the industry, I attempted to throw all that way and go back to wrestling in VFW bingo halls. It didn’t work out that way, I’m sitting here talking to you and wrestling in front of 15,000 people again. It’s all just crazy timing. I kind of didn’t even find AEW, AEW found me.”

“He called me for some advice, and the social media-friendly guy that he is,” Chris Jericho said, “he didn’t even know that AEW was a thing.”

Moxley added, “I didn’t tell anybody, not even my closest friends in WWE, that I was leaving. The first person who knew outside of me was Chris. The first show was in my hometown, so I didn’t have to get on a plane. It was almost by accident.”

Nyla Rose was also asked about coming up short against Riho in the inaugural AEW Women’s Championship match on Wednesday night, which got a better reaction than she gave the media after the show. Calmed down and out of character, Nyla reflected on the loss and said she’s taking it as a learning experience. “Luckily, we can go back, watch the replay and study where I went a little off-kilter. Being around everybody, learning constantly,” Nyla said, “I couldn’t ask for a better reason, it’s kind of why I’m here.”

As a follow up, the host pointed on Nyla making headlines as the first transgender athlete signed to a major wrestling promotion, and asked if there’s extra pressure or pride in being labeled as trans instead of just as an athlete. Nyla said you don’t see that happening with other races and ethnicities in sports, but she’s OK with carrying the flag a bit if it means getting her community closer to the point of just being called athletes without a label attached.

“It’s a little weird, there’s definitely pressure. At the same time, I want to make enough noise so that they’re not putting that out there.” Nyla said. “I’ll be so happy when we get the point where it’s ‘Nyla did something’ and that’s the headline. That’s where we gotta get. If I could help get us there, I don’t mind driving the car for a little bit. I’m used to these long road trips.”

Related: An Explosive Debut: What AEW Got Right In The Series Premiere Of ‘Dynamite’