HomeNewsNJPW King of Pro-Wrestling Preview: Everything In Its Right Place

NJPW King of Pro-Wrestling Preview: Everything In Its Right Place

NJPW King of Pro-Wrestling Preview: Everything In Its Right Place 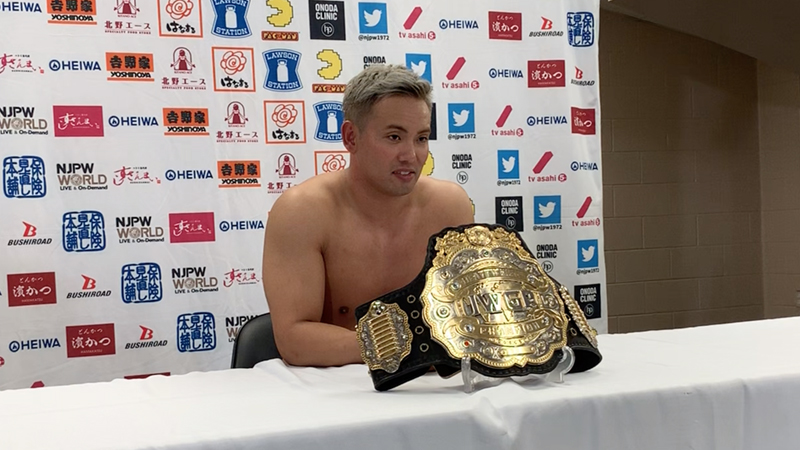 “A beautifully set table is the perfect canvas for a delicious meal.”
-Chantal Larocque.

New Japan Pro-Wrestling started this year gutted by the loss of Cody Rhodes, Matt Jackson, Nick Jackson, Hangman Page, and then-IWGP Heavyweight Champion Kenny Omega. They’ve spent the past year rebuilding their stars out of wet clay. At King of Pro-Wrestling, the kiln will be turned on, and the stars of NJPW will be solidified.

In literally any other company, in any other era, Seiya Sanada would be the face of the promotion; the company ace. While not a big talker, his quiet charisma has captivated Japanese audiences in WRESTLE-1 and All Japan Pro-Wrestling since 2007, but since his New Japan Pro-Wrestling debut in 2016, he has hit his limit. As the case has been since time immemorial, Sanada’s limit is not so much a personal failing, or an achilles’ heel, it’s time itself. Sanada happened to exist at the same time, and wrestle in the same promotion as “The Rainmaker” Kazuchika Okada.

In a world where every wrestler is trying to prove that they are the reincarnation of Ric Flair, Okada is the Dalai Lama. Elevated by fans & press alike to an almost god-like status, Okada has reigned over one of New Japan Pro-Wrestling’s most prosperous eras, and management has rewarded him in kind. He’s broken most of the records associated with the IWGP Heavyweight Championship, and been allowed to be the face of a franchise in a way that few promotions allow. Its nigh impossible to look at this Monday’s show, and think anyone other than Kazuchika Okada is walking out with the belt. NJPW has a way of showing their hand like this.

Take Okada’s eventual Tokyo Dome challenger, Kota Ibushi, for example. Is there a world where Ibushi loses the Wrestle Kingdom Challenge Certificate to anyone, let alone EVIL? EVIL has always been the runner-up to perennial runner-up Sanada. It should be a crime that I am writing about either Sanada or EVIL as a runner-up, let alone both of them, but holy sh*t, here we are. Both men have been imprisoned in tag team competition for the crime of not being Kazuchika Okada, and King of Pro-Wrestling will mark the end of their day-pass from the doubles division. King of Pro-Wrestling feels like NJPW putting everything back into place before Wrestle Kingdom season.

The IWGP United States Heavyweight Championship will likely return to NJPW, after spending the last 129 days in its eponymous country, and likely Jon Moxley’s living room in Las Vegas, NV. Moxley will face Juice Robinson. Moxley tapped into his history as a deathmatch brawler, and overall crazy son of a bitch, to wrest the title from Robinson’s flamboyant clutches at the Best of Super Juniors finals in June. Moxley literally chewed on Juice’s face, leaving a vicious scar, to win the title, in a standard regulation match that saw Robinson try to fend off Moxley’s use of tables, chairs, teeth, and plunder to no avail. Despite sharing a former employer, their last match was a styles clash.

Robinson & Moxley are both castoffs from WWE’s empire, albeit with different paths. Robinson left WWE’s developmental program and entered into NJPW’s dojo, essentially jumping from developmental to developmental. Robinson originally had an offer to just jump to NJPW as a full-time talent, but opted instead to take it slow and learn the ways of the promotion. Robinson learned NJPW’s customs, and made himself the star in Japan that Moxley already was in the States.

The former-Dean Ambrose came into NJPW with a far bigger chip on his shoulder. He used his star and his name to earn a title shot right at his debut. After beating NJPW dojo trainee Shota Umino at Dominion, he claimed the Young Lion for himself, shaping him in his image. Not only did Moxley claim a member of the NJPW dojo at Dominion, he also inserted himself into the most prestigious tournament in wrestling today, The G1 Climax. He did not win the tournament, and even his participation raised questions.

Moxley is very proudly All Elite Wrestling’s biggest signing; a shot across the bow at WWE’s monopoly over the North American wrestling landscape. AEW’s relationship with NJPW can be described as frosty at best. AEW took talents central to NJPW’s North American expansion, and have left NJPW with their proverbial d*ck in their hand. He even caused a scheduling headache, as he was unable to wrestle for NJPW in the United States, which is would already be an ordeal for the UNITED STATES Champion in a normal year, but this year the G1 Climax kicked off in…yep, the United States. This meant that Jon Moxley was unable to appear at the traditional pre-G1 Climax press conference, wasn’t able to wrestle on the opening night. NJPW was running their second 10,000+ seat arena that night, and when the attendance of 4,000-5,000 was announced, it was clear that his absence was felt. Moxley was placed in this year’s B Block, so as to make sure that he had no connection to what was supposed to be one of NJPW’s biggest weekends in North America.

When the tournament got underway in proper, Moxley was seemingly killing time in this year’s G1, keeping is face fresh and his ring rust minimal for AEW’s October television debut. An injury kept him from even being considered for the Destruction tour in September, and now AEW has debuted on TNT, and Moxley’s availability shrinks. There is little logic behind the IWGP United States Championship to be around Moxley’s waist. With a no disqualification stipulation added to Monday’s title bout, Juice has management approval to unleash exactly the kind of assault that lost him the belt in the first place.

The only wildcard of the night will be the fight between Jushin Thunder Liger and Minoru Suzuki. The only assurance is that there will be violence. Enough violence to keep this fiery feud burning into January? I hope so. Will someone die? Maybe. We’ll see.

The final title match of the night will see Will Ospreay defend the IWGP Jr. Heavyweight Championship against EL Phantasmo. In a year that has seen Ospreay compete in every tournament that NJPW holds (assuming he works World Tag League), Phantasmo has been the only one to have Ospreay’s number. A rematch of the Super J-Cup semi-finals, Ospreay will be looking to avenge his loss to ELP. However, with ELP already the IWGP Jr. Tag Champion, and Ospreay being…well, Ospreay, it’s likely that the Aerial Assassin walks out with the title belt, en route to what will likely be a big match at this year’s Wrestle Kingdom.

Elsewhere on the card, El Desperado reunites with Suzuki-gun, bringing the faction back to full strength. Hiroshi Tanahashi has his fourth 20th anniversary match, likely getting revenge on Toru Yano & Togi Makabe for besting him on last week’s New Japan Road show. Plus Goto continues his feud with Jay White, and Los Ingobernables de Japon take on Suzuki-gun.

With just Power Struggle, and World Tag League left to set up Wrestle Kingdom, pieces need to be put in place for a proper build. King of Pro-Wrestling is a card designed to set that table. The outcomes feel predictable, but after a year of rebuilding a gutted roster, NJPW is set to have everything in its right place in January.

NJPW King of Pro-Wrestling will air at 4am ET on NJPWWorld.com