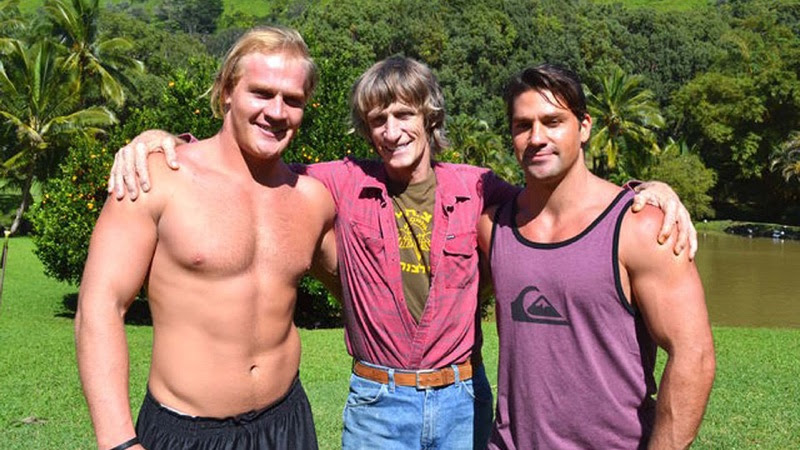 Dallas is running on all cylinders this week as the Von Erichs make their return to where it all started in the squared circle for their family. It’s going to be real serious business as they face an unstoppable force in CONTRA, but brothers Marshall & Ross join forces with Low Ki & Tom Lawlor in the unforgiving War Chamber.

A returning Leo Brien comes firing out into the NYTEX Sports Centre to start off Fusion from Dallas. The once turned bounty hunter from Colorado was ruthless and relentless, making very quick work against his young opponent Blake Banks. He threw Banks across the ring by his ears (not a typo) before prepping him up for an Oklahoma Stampede for the devastating 1-2-3. Rich Bocchini said it perfectly: “Leo Brien means business” and the Dirty Blonde gives a final stomp to Blake before exiting.

Salina de la Renta and LA Park picked up where Brien left off and continued the attack on Blake and even the referee before “The Empresia” introduces “her destroyer, LA Park.” Salina goes on to announce that LA Park will cash in their Golden Ticket at Super-Fight worldwide PPV in Chicago. Salina calling her own shot is a bold move, but will it pay off come ticket time against The Samoan Werewolf Jacob Fatu?

From hockey, to boxing, to even badminton, Teddy Hart has played and excelled in all types of sports and it’s all helped him specialize in the sport of professional wrestling. He’s ready to take that talent to The Dynasty next week on Fusion with Davey Boy & Brian Pillman Jr as the two factions’ feud rages on.

The city of Dallas and The Von Erichs are synonymous with one another and that synergy shows when Ross & Marshall visits the hallowed grounds of The Sportatorium with their legendary father, Kevin Von Erich. Kevin gets emotional as he shares in such a special moment with his sons.

The mood changes as we see Timothy Barr stand mid-ring surrounded by the barbed-wire confines of the ominous War Chamber. Barr runs down the rules of War Chamber which go as follows:

– Once all combatants are in the War Chamber, victory is won by submission, surrender or pinfall.

After the rules, the first two Chamber entrants are revealed. On CONTRA’s behalf it was a masked Gotch who made his way to the ring. Dallas erupted when the first competitor for Team Von Erich ended up being Marshall. It’s a surprising tactic, but one of strength and bravery as the fans are elated to see him walk out with his father after being blinded by Ikuro Kwon just a few weeks earlier.

The bell rings and the two trade blows before Marshall hits a beautiful standing dropkick. Marshall yells out “Let’s go Texas” as he cannonball rolls Gotch in the corner and begins to assert control.

“Let’s go Marshall” is echoed throughout the arena while he downs Gotch. The 6’4″ Von Erich shows his technical prowess and his striking strength with some solid European uppercuts.

The clock ticks down and we find that it’s CONTRA who won the toss as Josef Samael makes his way towards the Chamber.

It’s almost immediate that the numbers game comes into play as Gotch and Samael strike and maul Marshall down.

“We want Ross” chants are heard as the two continue to beat down his brother who still somehow manages to maintain some fire as Filthy Tom sprints in as the fourth entry.

The two quickly contain CONTRA a and Team Von Erich change the tide of the fight.

Next up is the World Heavyweight Champion Jacob Fatu and the Champ shows exactly why he is that as he catches Lawlor with a Samoan Drop and takes out Marshall with a handspring moonsault.

The momentum goes back in CONTRA’s favor and the dirty tactics are on full display as Samael is seen gnawing on the ear of Lawlor.

Low Ki is the third Von Erich member to enter the structure, but before he does he pulls a page out of Badstreet U.S.A.’s book to smack Samael in the head with the cage door.

The Lone Wolf of Brooklyn enters the fold and it’s evident as why he’s become an imperative part of the unlikely alliance. That cage door smash caused the crimson to flow out of Samael’s face as we see the mysterious Ikuro Kwon makes his way to the Chamber. Kwon immediately goes after Low Ki and both men exchange crisp kicks to the chest. You can begin to feel the chaos rise as the bloodshed really starts to show its color in the pre-bout brawl.

The final entrant is Ross Von Erich and the match is officially underway. Ross may be suffering from the flu, but is full of fire and transfers that adrenaline over to Marshall as he locks in The Claw back suplex slam.

The majority of the men are down while Ross begins to go after Fatu who he sends airborne with a mid-ring hurricanrana.

Speaking of which, Fatu is feeling the effects of the match and begins to choke Ross with his wrist tape.

Lawlor starts slugging away at the champ, but Fatu literally shakes off his strikes and starts to pound Tom down in the corner.

The pendulum looks to be swinging in the favor of CONTRA, but Team Von Erich show its fortitude as Kevin Von Erich watches on.

Lawlor shows he isn’t finished with Fatu and strikes away at the champion.

Samael showcases his sadism as he uses his bloody wrist tape to strangle out his opponents. He then makes a critical mistake by talking trash to Kevin on the outside and that ignites a rage in Marshall who flips him down to the canvas for a spinal tap kick.

Fatu finds his next level and goes on the assault when he picks up Ross for a Samoan Drop. Marshall tries to stifle with a Claw onto Fatu, but he knocks him away with the body of his brother before he executes the Samoan drop in full.

Things get real wild as Low Ki and Samael struggle to grate one another’s forehead’s off the razor wire. Low Ki wins that battle, but interference occurs when a masked solider attempts to climb into the action, but Kevin puts a quick stop to that with a Claw of his own.

Everything looks just about over as Lawlor locks on the rear naked choke on Samael, but Samaels spikes Lawlor in the hand, Kwon mists him in the face before Fatu smacks him down with a standing sidekick. Fatu leaps up for the springboard moonsault and goes for the almost surefire pinfall, but Low Ki makes the necessary save.

Gotch goes for a spike piledriver on Ross but Marshall catches wind and latches the Claw on Gotch. With Simon in his clutches, Marshall makes his way to the corner and climbs to the top rope as Ross settles under Gotch to lift him up on his shoulders. Marshall then leaps off with Gotch becoming the recipient of a Claw Slam and resulting in a extremely hard fought win for Team Von Erich.

Kevin is beaming as he enters the ring to embrace his two boys. Low Ki even goes to congratulate Tom Lawlor and true unity is shown among Team Von Erich and provide a much-needed halt to CONTRA who has been running rough-shot on MLW. A new life has been breathed into the foursome as CONTRA has no choice but to regroup and refocus.

RELATED: Salina De La Renta On Her Love For Producing, Working With LA Park (And Her Hatred For Konnan)

These results are written by Dominic DeAngelo but are courtesy of MLW.com. Watch the full episode of MLW War Chamber below: