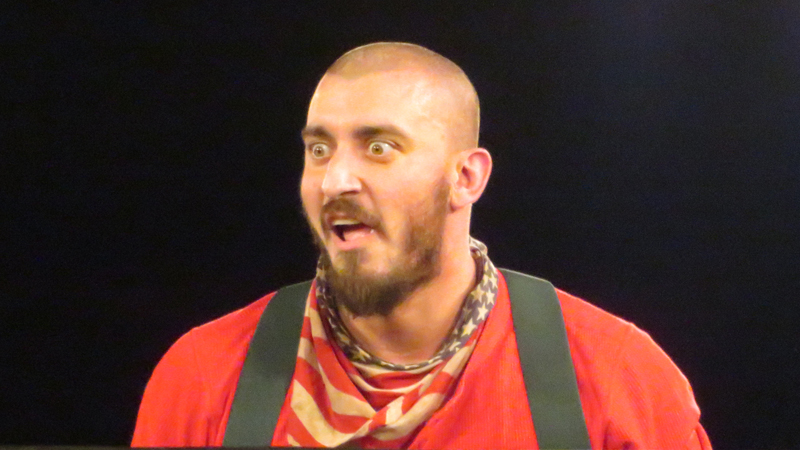 This week’s MLW Fusion is packed with a variety of ol’ school action. Tonight’s main event has Ol’ Mance Warner ready to slap the work boots on and go to war with Jimmy Havoc in a Bunkhouse match while the “Sweet Scientist” in Timothy Thatcher looks to lock up with debuting Jiu-Jitsu and kickboxing extraordinaire, Douglas James.

First, we see the Injustice trio outside of the arena and then backstage as Myron Reed cites that he needs his chest protector to save his “injured ribs” from further damage. “Hey, if Tupac had the strap on him, he’d still be alive today!” says Jordan Oliver, who was victorious last week against Tenshi due to the help of Myron’s means of protection.

Referee Frank Gastineau does the due diligence of checking Injustice for foreign objects and sure enough, finds a chain inside Kotto Brazil’s jumpsuit. While confiscating that, Oliver hands Kotto those familiar brass knuckles to Brazil, but Gastineau catches such transgressions in his peripherals to take those away as well.

The pace and rhythm begin in Injustice’s favor but Gringo Loco hits a standing moonsault to shift the momentum.

Air Wolf takes over up against Myron Reed and the 19-year-old upstart tries to knife-edge chop Reed, but that unneeded protector does its job. Loco gets back in and begins to feel the full effect of Injustice’s unjustifiable ways with orchestrated team attacks behind the ref’s back.

Kotto has a close pinfall after powerbombing Loco off the top turnbuckle, but Myron Reed tags himself in as Brazil was executing the move so the fall wasn’t administered.

Everything changes in the chaos when Gringo Loco shows his strength by planting both Reed and Brazil with a DOUBLE electric chair drop. Kotto may have shot his team’s chances in the foot by getting too involved because Gastineau believes him to be the legal man. Air Wolf gets the tag back in, immediately goes for the pinfall on Brazil and gets the 1-2-3.

Post-match, Injustice can’t own up to their mistakes and begin beating down Gastineau. Even during the commercial break, Injustice go on to attack more officials as order tries to get restored.

We finally get to meet Mancer’s Uncle “Moon Man” (no legal names due to side business) who drove down from West Virginia to support his nephew as he’s ready to settle the score with Jimmy Havoc. Uncle “Moon Man” lives up to his name as he sips on something special while Mance pontificates about the ass-beating that Havoc has in store for himself. The two saunter off as “Moon Man” shows zero regard for shoes.

From Cincinnati, Brian Pillman Jr. gives us an update on Teddy Hart who spent the night in Parkland Hospital. Last week, Hart suffered a brainbuster on the apron at the hands of an interfering Austin Aries. Brian tells us that he just spoke with Bret Hart and the entire Hart family to learn that Teddy is permanently injured. Now, Pillman’s gonna do what he’s gotta do. He challenges Austin Aries for singles action next week, barring any suspensions that Aries may have in front of him.

Not long after their War Chamber victory a few weeks back, The Von Erichs stopped by Texas Children’s Hospital to pay a visit to the young patients inside and ran into MJF and Holliday outside. Matters got a little tense as The Dynasty duo revealed that they were looking to buy up the hospital with plans to turn it into a casino or hotel. Kevin Von Erich took major exception to such claims and slapped the Starbucks out of a shocked Holliday’s hands. With Marshall & Ross eyeing the MLW tag team gold, the brothers certainly got some more incentive to assert themselves after that encounter.

MLW is introduced for the first time to “The Ultimate Hybrid Wrestler” Douglas James. James has a world of experience but so does his opponent Thatcher as the two start the engagement by literally getting low the mat. Thatcher goes for that patented single leg crab but James counters into a leg lock. Even with Thatcher’s height advantage the two present to be very equal adversaries as James trades blows with Thatcher.

The tension escalates when James slaps Thatcher across the mouth. Thatcher brings James back down to the mat, but the Jiu Jitsu expert is quite hard to pin down (both figuratively and literally).

Tides turn when Thatcher charges at James and Douglas hip-tosses him down with a cross armbreaker. Thatcher uses his upper body strength to turn James over for not one, but two gutwrench suplexes. Only good for two.

Thatcher applies a double underhook however James answers back with several high knees and a superkick to get him down for a two count. James begins to slug at Thatcher, but he completely smacks away James’ effort.

James finds the fortitude to lock Thatcher in for a standing guillotine, quickly rolls away to hit him with an “on-the-button” high knee and climbs the top rope. James vaults himself off with a rotating frog splash, but Thatcher gets his knees up and secures the Fujiwa armbar for the tap-out win.

Thatcher gets on the mic with Kaci Lennox who gives big respect for the effort put forth by James and James returns the kind words with some of his own. Thatcher wasn’t finished however and issued a challenge for a particular someone at Saturday Night SuperFight in Chicago this November.

“When I came to MLW, there was one man that I wanted and that’s ‘Filthy’ Tom Lawlor. Lawlor vs. Thatcher. That sounds like a Super-Fight, doesn’t it?” (You betcha, Tim!)

Even with Mance Warner hosting his Uncle “Moon Man,” the Southern Psycho isn’t finished with the mind games on Jimmy Havoc. Scarecrows don the walls of Havoc’s locker room, but Jimmy didn’t look phased as he plucks the pitchfork from the wall to tell Warner “you’re screwed.”

Mancer himself goes to the classroom before the Bunkhouse Brawl to play a little Pictionary with correspondent Kaci Lennox. Warner has Lennox sketch all the items he plans on bringing in his truck to the forthcoming shindig and he gives at all an exclamation point with a spittoon.

Before we get to the bout, it’s official: next week it will be Brian Pillman Jr. against Austin Aries!

“England’s Most Dangerous Man” enters first and picks up a shovel to await his opponent. “The Bucksnort Brawler” indeed comes out waving the red, white and blue and while on the apron, Havoc hits him from behind and we’re underway.

Havoc disrespects both Mancer and the flag by choking him with “Old Glory.” Both begin brawling outside and JImmy goes to strike Warner with the cowbell, but Mance moves and grabs hold of the bullrope. “More Cowbell” is appropriately chanted as Warner belts Havoc with it. Havoc however gets hold of the actual ring bell and smashes Mance with it. He then places it between Warner’s legs and uses the cowbell to ring Mance’s personal wind chimes. Someone asks Havoc what’s wrong with him and Havoc’s response? “Everything is wrong with me!”

He sure shows that as he goes for his beloved staple gun. Luckily Mance wards him off with a chair shot.

Havoc holds the power soon after when Mance misses with the stick side of a shovel. He’s got Warner back in-ring as he finds a rake to scratch the back and forehead of Mance.

Mance shows his wherewithal by striking Havoc with an eye poke and takes Jimmy for a ride on the rake handle.

Ol’ Mancer is feeling froggy as he pulls out one of the back-up ringboards and props it in the corner. Warner delivers a Bionic Elbow onto Havoc for some “hard times” and it’s worthy of a two count. Warner picks up the pumpkin to toss it at Jimmy, but Havoc ducks and uses his staple gun to impede Warner’s “testicular fortitude” – two staples for both of his boys.

Havoc presents a Jack ‘O Lantern to the crowd and makes sure Warner gets a taste of it by stapling his tongue to the lid!

It’s certainly a horrific visual was we see Mance pry his tongue from the top, but it provides enough adrenaline for him to DDT Havoc’s head inside the jack o’ lantern. Mancer hits a running knee for a near fall that had to have Havoc spitting pumpkin seeds.

Warner brings in another board and grabs two chairs from fans. He stomps a mudhole into Jimmy before balancing the board between the chairs. Havoc hits a hard right forearm and German suplexes Mance into the hay. Havoc then picks Mance up to drop him through the cornered board with a Death Valley Driver. Warner amazingly gets his shoulder up after two.

Warner’s tongue felt further wrath as Jimmy drags him to the other board and staples it to the board. Havoc places the pumpkin atop of Warner’s head before climbing the turnbuckle. Warner suffers through the agony again of pulling his tongue free and throws the pumpkin at Havoc to stall him just enough for superplex between the board!

Blood is spewing from Mancer’s mouth as both men stand up. Mancer makes the most of the moment and big lariats Havoc down for the well-earned win.

Havoc is outraged. He grabs some barbed wire and spitefully slices Warner with it. Blood spurts from Mancer’s face as Havoc pulls the wire across Warner’s skull. Officials try to stop the madness, but things get even more gruesome as Havoc wrenches the wire in Mance’s mouth. Havoc strikes security and officials away as his blood-thirst continues at the behest of Bucksnort’s favorite boy.

Havoc walks away from the destruction left as Mance struggles to his feet. Pretty safe to say that this war between Warner and Promociones Dorado is very far from over.

RELATED: MLW Announces Zeda Zhang As A Member Of Their Upcoming Women’s Division