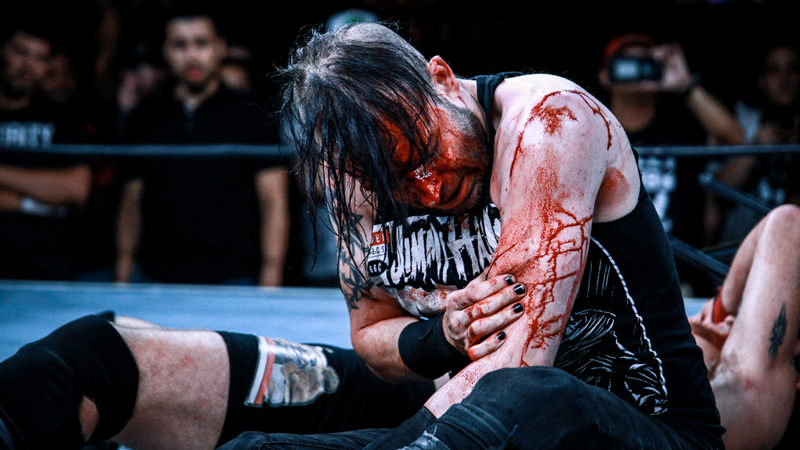 We start off MLW Fusion in Hawaii as both Marshall and Ross Von Erich are frustrated about The Dynasty dodging them in Tijuana so they couldn’t get a Tag Title shot (which instead unexpectedly went to Los Parks), but they have some big news: they’ll be getting their title shot at Saturday Night SuperFight in Chicago. The wind will certainly be gusting in Chicago that night as Ross revealed that it will be a Texas Tornado tag against Holliday and MJF!

Matters get manic as Jimmy Havoc’s Slaughterhouse commences and it’s “England’s Most Dangerous Man” himself runs down the card: it will be a member of Promociones Dorado taking on Josef Samael in a Tijuana Street Fight. Then, Havoc himself will face Damian 666 and Savio Vega in a Pentagram Deathmatch in an effort to display his bloodlust.

The match starts off with trio suicide dives delivered by Los Haraganes. They quickly took the action to the inside as the three use their team chemistry to their advantage.

Silver Star comes over the top rope with a guillotine leg drop and the three then sets their sights on Star Boy.

We get back from break as we see Demencia and Zarco are trading blows and the fast-paced action continues before the feed is cut and we are introduced to CONTRA. Josef Samael states that CONTRA is everywhere and tells Salina that when she least expects it,they might bring the war to her front door. Jacob Fatu reiterates that it will be the “Day Of The Dead” for LA Park come SuperFight on November 2.

Thankfully, the feed returns and we see Star Boy going toe-to-toe with Demencia. Star Boy is visibly bleeding from the head and Arandu comes in for the save (who also is donning some crimson). Arandu slams Demencia down with one nasty DDT utilizing the top rope. Silver Star comes in with a sit-down powerbomb for a slower than usual two count.

Zarco comes in in hopes to change Triple Amenza’s momentum. Three floorboards are leaned up against the ringside barricade. It’s high risk indeed as both Zarco and Arandu come vaulting out of the ring, but miss their targets leading to both men crashing through the floorboards! Los Haraganes make the most of the opportunity and demolish Star Boy with three triple-team powerbombs to secure the victory. Quite the sadistic start to Slaughterhouse.

Salina de la Renta is standing by the side of her Destroyer, LA Park, and the number one contender has quite a bit to say about his SuperFight foe, Jacob Fatu.

With some haunting language himself, LA Park tells the champ he’s going break his “f*cking face” and end him. The Chairman says he’s going to take the MLW Title to Mexico, but not before he does what he just so colorfully promised.

We cut to Brian Pillman Jr. who happens to be poolside with a female friend, but his focus seems to be on the conversation Low Ki last week who told him to not let his hot-headedness get the best of him. Pillman however, still takes exception and thinks Low Ki is line-stepping.

Executive Producer Jimmy Havoc reveals who Josef Samael’s opponent will be: Hijo de LA Park. Hijo’s opponent is nowhere to be seen, but it doesn’t take long for Samael to siege attack from behind so the battle begins outside.

Samael slugs away at El Hijo and even shoves Salina aside to continue his attack. The ref tries to restore order (as much as a Tijuana Street Fight is capable of). El Hijo musters up enough gusto to go on the offense as he slams Samael through a wayward board before using half of it to splinter down on CONTRA’s controller.

Samael gets slammed on another board. Samael’s shirt is tattered as El Hijo stays on top of his adversary, but it was only a matter of time before Josef’s CONTRA allies show up. Both Simon Gotch and Ikuro Kwan come out of the darkness to gang up on El HIjo. Salina is on the phone demanding help, but the damage is already done.

Rich Bocchini notes that this had to be a pre-planned hit and then reports the El Hijo was taken to a local medical facility.

We get a message from Mance Warner: he knows Jimmy Havoc loves barbed wire, but so does the Southern Psychopath and as he was laying in a haze recovering, he saw a stairway which got his mind racing. It so happens that he’ll be cleared to go just in time for SuperFight and he’s got a challenge for Jimmy: a “Stairway To Hell” match! Mancer wants a ladder and barbed wire hanging atop from the ceiling.

Havoc is quick to respond after he sees Mance’s Twitter. Havoc says a “Stairwell To Hell” match is the first deathmatch he has ever seen. Havoc literally licks his chops and accepts “The Bucksnort Brawler’s” challenge.

We tune into another episode of “Lifestyles of The Rich & Dynastic” and the boys are back in the U.S., but they do have bad news carrying with them and that’s the upcoming Texas Tornado match with The Von Erichs. A “wired-by-the-coffee-bean” Holliday tries to settle his comrades by saying that his lawyer/father will try to make it a Dynasty Tornado Match (which is just a match that favors Dynasty). That kind of caffinated crazy talk impulses MJF to snatch Holliday’s fifteenth “cup of Joe” from his clutches.

It’s main event time as Jimmy Havoc labels his three-way-finale as “a true spectacle of the macabre.” He along with Savio Vega and the seasoned deathmatch vet in Damian 666 make their way to the squared circle. Salina accompanies Damian to the ring and the bell rings. It’s clear that her partnership with Havoc is on rocky ground as Damian joins Vega on the attack of Jimmy.

It doesn’t take long for weapons to get introduced as Savio gets surgical with a kendo stick after both Havoc and Damian distribute cookie sheet strikes with one another.

The violence carries on and Savio stays on top with the kendo stick, but Damian soon gains control of it. The tone darkens even more as Havoc introduces thumbtacks into the equation, but that backfires on the executive producer as Damian sits him right down on them. To further add to the pain, Damian drop toe holds Havoc, sending his head to crash down into the tacks.

Damian later sets up a table and it’s not long before he sends Savio down through it with a super-plex that echoes throughout the arena!

Damian goes for the cover but Havoc halts all of that before a count is administered. Savio somehow finds the strength fires back at Havoc with a right hand, but Havoc strikes him down with an Acid Rainmaker for the 1-2-3.

Post match, Havoc does the same to Damian and begins a beat-down on the veteran. It doesn’t take long for his son, Beastia 666 to come charging down to the ring for the save. Havoc tries to do the same to Beastia, but the son of 666 will have none of it who sends Havoc high-tailing to the back.

These results were written by @DominicDeAngelo but are courtesy of MLW.com. Watch the full episode of MLW Fusion below: