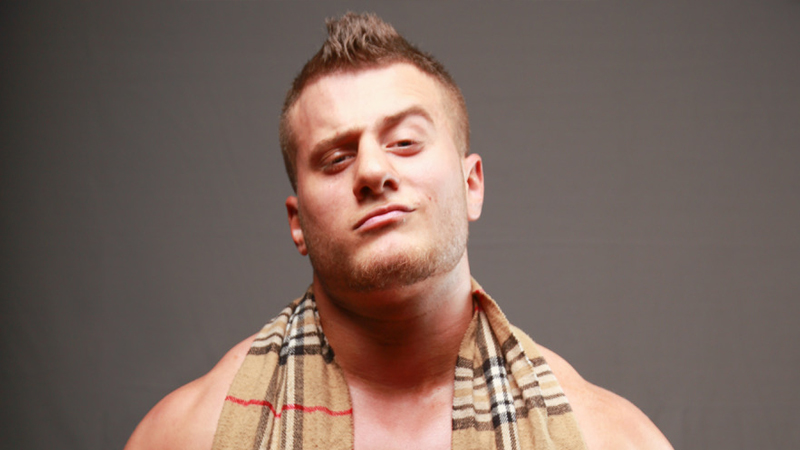 This week’s episode of MLW Fusion started off with a crimson covered Josef Samael after his CONTRA Unit team lost to the literal hands of Team Von Erich in the War Chamber. A wild-eyed Samael tells Marshall and Ross that it isn’t over by a long shot and the next claim he made had to make the brothers’ blood boil in rage:

“And your daddy Kevin, I know he is the heart of that family and I’m gonna stick this stake right in his goddamn heart and destroy you all…”

Zenshi took down Oliver quickly but the two both go for quick takedowns but one another kept meeting each other in high-flying stalemates before Zenshi successfully landed a running shooting star press.

Oliver tried to come off the top rope with a head-scissor takedown but the amazing body control of Zenshi allowed the Chilean combatant to land on his feet. Kotto Brazil took the moment to trip him up so Oliver got an opportunity to strike.

Tony Schiavone described Injustice perfectly as a “pack of hyenas” as the trio took every advantage to insure Jordan stayed on top, but Zenshi showed resiliency time and time again even as the official was lured into an outside argument with Brazil (which may have cost Oliver a legitimate three count via backslide)

Zenshi quickly hit a running twisting neckbreaker to put Jordan down, but as the referee went to administer the pinfall Kotto pulled the official out of the ring. The ref chased down Kotto and Oliver flew over the top rope to hit an inside out stunner on Zenshi.

Myron Reed, rib protectors and all, seized the moment to deliver a springboard 450 splash onto Zenshi. Oliver rolled back in the ring to get the undeserving victory.

Post-match, Injustice went full hyena mode by attacking Zenshi and the referee until Gringo Loco shows up with a steel chair to even the odds.

In some relieving news, wrestling legend Savio Vega has been activated from the injured reserve list and the Carribean Champion plans to come back to MLW on a limited basis.

Mance Warner is a free man thanks to his uncle “Moon Man” (real name not disclosed due to his side business). He’s “barefoot like a sonavabitch” and ready to take on Jimmy Havoc in a bunkhouse brawl match. “One on one, I’m gonna bust you up, Jimmy,” claimed Ol’ Mancer.

Richard Holliday tuned us in to “Lifestyles of the Rich and Dynastic” during 6 am work-out (more like tanning session) to tell us how big of phonies the “Fraud Foundation” actually are as he and MJF aim to prove it tonight in two-out-of-three falls.

Rich Bocchini interviewed the Von Erichs and asked the famous family about who their choice is for tonight’s big tag match and Kevin was apt to lean towards the Hart Foundation, but Marshall and Ross state that theare here for tag gold and were all ready to give that mission statement. MLW may have some historic action in store down the line.

MJF and Richard Holliday began the bout off with mind games by going through a few rounds of rock, paper scissors, but the Harts were quick to break up hijinks.

The brawl started off on the outside and Teddy hits both of his opponents with a springboard moonsault.

Teddy rang the bell to unofficially start the match but The Dynasty remains on the outside to regroup before rolling in the ring to get the match officially underway.

Teddy used his technical prowess to isolate MJF onto the ground, but MJF countered with some technical moves of his own. Teddy got him in a shoulder lock that caused MJF to roll out of the ring and then tagged Holliday in. Teddy then tagged in Davey Boy.

Davey Boy showed that “bulldog” mentality as he hones his focus in on the left arm of Holliday. The Dynasty eventually try to high tail out of the arena, but the Harts brought them back into the action. The Harts continue to control the pace and deliver stereo Northern Lights suplexes for a near first fall.

Aria Blake’s presence was made as she at attempted to gouge the eyes of a prone Teddy, who took the opportunity to take a bite out of crime.

Nobody wants to go down as the first fall doesn’t come for quite awhile. Davey Boy even hit Holliday with a powerslam and a diving headbutt sequence, but the rich boy displayed his resiliency by kicking out.

This allowed Holliday to hit Davey with a stunning jawbreaker but both incidentally butted heads. As Richard leaned on the ropes to recover, MJF on the outside strategically shoved him on top of Davey for the unexpected first fall.

The Dynasty: 1, The Hart Foundation: 0

After a thirty second break, MJF cockily helped Davey Boy back to his vertical base and boy, was it a mistake. Davey found his second wind and began battering MJF’s melon into the turnbuckle. He quickly tagged in Teddy who hits a Canadian Destroyer and beats down both members of the Dynasty. Teddy climbed the top rope but MJF used his left shoulder to knock Teddy down. Teddy found his footing however and nailed MJF with a top rope Canadian Destroyer. He then hit a springboard corkscrew to even the score and give the Foundation their first fall of the match.

The Dynasty: 1, The Hart Foundation: 1

MJF is out like a light even after a thirty second break. Hart hoists him back up for a hammerlock DDT but Holliday runs in to boot Teddy down.

Teddy is left vulnerable and who came out to crash the party but his aspiring Middleweight Title adversary, Austin Aries. He delivered one nasty brainbuster on the apron to put Teddy out of commission. And it did.

MJF was still out at this point and Markham began his 20 count. Teddy was unable to answer the call and The Dynasty retain the Tag Team titles. The medical staff come to check on Teddy Hart which is major concern as Davey Boy and the team help him to the back.