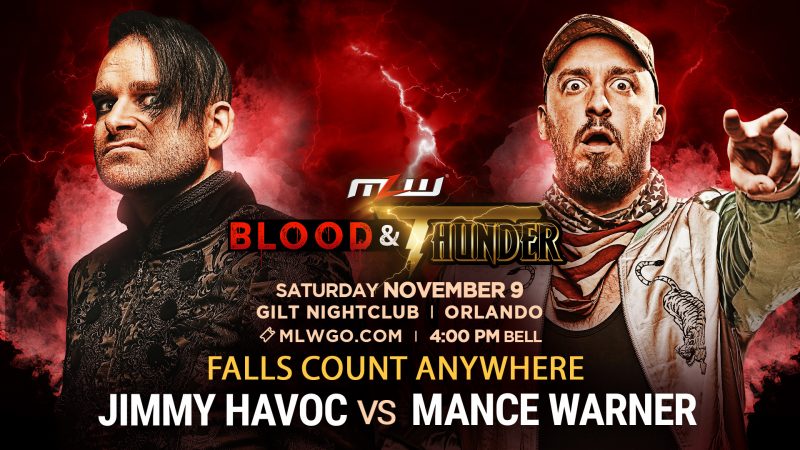 MLW is coming in hot off of their first ever PPV this weekend in Saturday Night SuperFight as they announced a headline match for their Blood & Thunder event in Orlando. The company just announced that Mance Warner will be taking on Jimmy Havoc in a Falls Count Anywhere match this Saturday. Warner came out victorious in the Stairway To Hell between he, Havoc and Beastia 666 at SuperFight, but Havoc made Ol’ Mancer pay afterwards with a fierce pile driver on top of a guardrail in Cicero. Now the Brawler from Bucksnort will get his shot to take on Havoc solo again since the two fought in a Bunkhouse Brawl Match last month. You can read the full details below!

Ol Mancer is heading to the Sunshine State in his new ’93 Chevy truck … but Mancer won’t be riding Splash Mountain as he looks for some southern-friend retribution against Jimmy Havoc in a bout where both men can take the fight literally anywhere from inside the ring to the swamps of Kissimmee.

England’s Most Dangerous Man has violent intentions as he readies for carnage in an unpredictable falls count anywhere clash. Having put Warner in the hospital in September, Havoc has become a bitter nemesis inflicting uncanny damage to the Bucksnort brawler. Now, the two are set to tangle in a state well known for its brawlers dating back to the 1970s.

Will Havoc’s dark shadow grow larger over MLW? Will Mance Warner once and for all vanquish the sinister Havoc? Will two wild wrestlers battle throughout SeaWorld? Find out live November 9 when MLW returns to Orlando.

Buy tickets starting at $20 at MLWgo.com.

Signed thus far for this card: