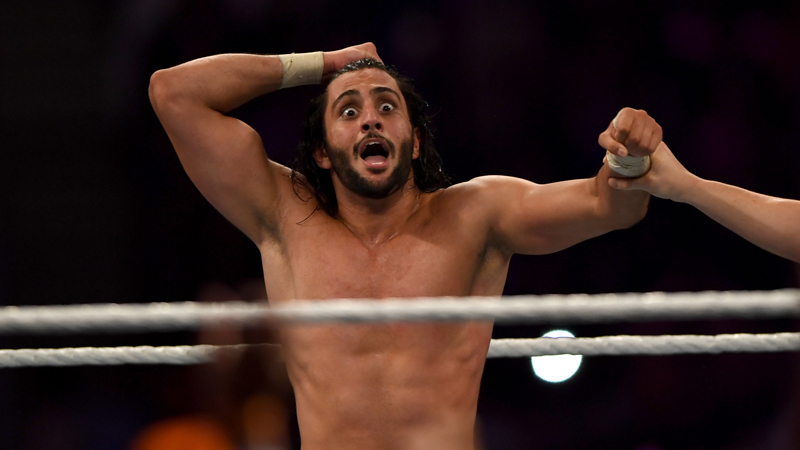 WWE has confirmed Mansoor will face off with Cesaro later this month at WWE Crown Jewel in Saudi Arabia.

Cesaro looks get some revenge on Mansoor, who eliminated him on his way to winning the 50-Man Battle Royal at WWE Super ShowDown in June. The official match preview can be seen below.

Mansoor made history the last time he competed in his home country, and it came at Cesaro’s expense.

Cesaro will try to stop Mansoor from further elevating his rising star when the two meet in one-on-one action in Riyadh, Saudi Arabia, on Oct. 31.

Mansoor shocked the world with his win in the first-ever 50-Man Battle Royal at WWE Super ShowDown in June. En route to that victory was an elimination of Cesaro with Mansoor sending The Swiss Cyborg to the outside with a scintillating dropkick.

Moments later, Mansoor last eliminated Elias to elicit a raucous reaction. Mansoor found his way into the crowd, celebrating his massive triumph with his fellow countrymen, and an emotional speech followed in the ring shortly after.

Now, Mansoor and Cesaro square off once more, but in much different circumstances. Will Mansoor find a way to overcome the odds yet again?

In addition, WWE has also confirmed this year’s World Cup winner will be determined in the largest Tag Team Turmoil Match ever. The match will feature the following teams, all fighting for the Cup, and the title of “Best Tag Team in the World.”

WWE Crown Jewel will take place on October 31 in Riyadh, Saudi Arabia; the following matches have also been confirmed for the event: