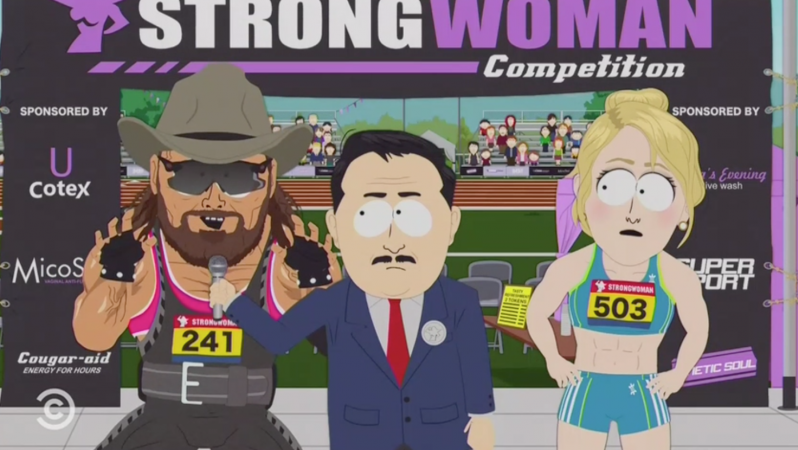 Randy Savage makes a special appearance on the latest episode of South Park and as always the case with creators Matt Stone & Trey Parker, the wrestling legend appears in controversial fashion.

A character named Heather Swanson appears to confront the character, PC Principal as a focal adversary in the episode. Swanson presents a more-than-obvious likeness to Savage in both appearance and cadence and the character has begun identifying herself as a female to compete as a transgender athlete in a “Strong Woman” competition.

Swanson has had a former connection with PC Principal’s wife, whose name happens to be Strong Woman. The official press release for the episode titled “Board Girls” is below:

NEW YORK, November 11, 2019 – The Annual Strong Woman Competition pushes everyone to their limits in the all-new episodes titled, “Board Girls” airing on Wednesday, November 13 at 10:00 p.m. ET/PT on Comedy Central.

In the season opener, an even stronger woman causes big problems for PC Principal. Cartman, Stan, and the rest of the boys meet their match when some of the girls join their board gamers club.

All-new episodes from this season will be available to stream in HD exclusively on South Park Studios and Hulu the day after they premiere. Fans will continue to have next-day access to new episodes, as well as the entire South Park library, across all internet-connected devices with a Hulu subscription. New episodes and a selection of curated episodes will be available to stream on SouthPark.cc.com, cc.com, and the Comedy Central App.