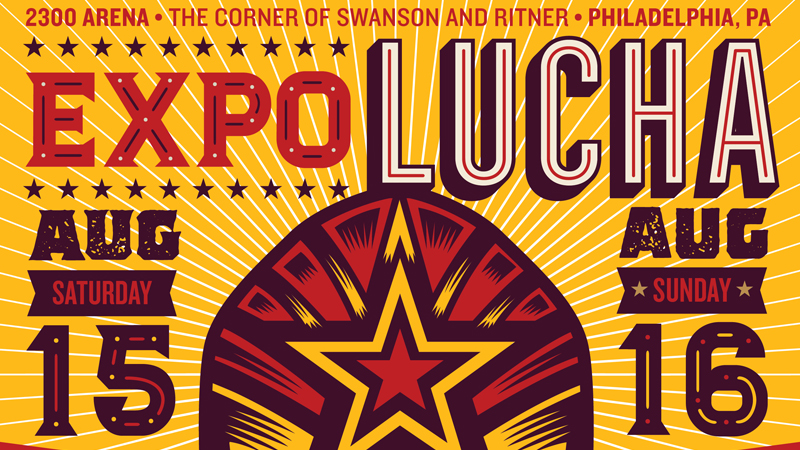 Expo Lucha, the world’s largest lucha libre fan convention and the only one held outside of Mexico, will make its east coast debut in 2020 when Expo Lucha: Philadelphia takes place August 15-16 at the 2300 Arena. That very venue was chosen because 2020 will mark the 25th anniversary of lucha libre arriving at the building known to wrestling fans as the ECW Arena.

Talent from the ECW era already announced for the expo in both matches and meet & greet sessions are Psychosis, Juventud Guerrera, Super Crazy, Mr. Aguila and Damian 666.

The three live events set to take place over the course of Expo Lucha: Philadelphia are indie showcase Viva La Lucha, Under The Influence (of Lucha Libre) a card dedicated to paying tribute to the lasting impact of the luchadores in ECW headlined by a 2 out of 3 Falls Match between Dragon Lee and Laredo Kid, and the Legends of Lucha Libre SuperShow set to be headlined by Dr. Wagner Jr., Octagón, Tinieblas Jr. with Alushe and more.

And, just announced, in a rare 2020 U.S. appearance outside of AEW, The Lucha Brothers, Penta Zero M and Rey Fenix, will be at Expo Lucha: Philadelphia for meet & greet (autograph and photo op) sessions. And, VIP Platinum and VIP Gold ticket holders will get an autograph from and photo with the Lucha Brothers included in their ticket package.

VIP Ticket Packages go on sale this Friday, November 15, 2019 at 12 PM PT/3 PM ET only at ExpoLucha.com. Details of all of the various packages are available now on the site.

The first 60 VIP Platinum tickets sold will also include admission to the private Lucha Bowl event which has become a highlight of past Expo weekends. Enjoy an afternoon of bowling not only alongside fellow lucha fans, but with a superstar or legendary luchador on each team!

Masked Republic released a highlight video from this past August’s Expo Lucha: San Diego event which can be viewed below:

Additional talent already announced for the convention are:

The convention will also feature two panels and two contests:

ECW Legends of Lucha Libre – where fans will hear stories from and be able to ask questions about the careers of Psychosis, Juventud Guerrera, Super Crazy and special guests.

Lucha Libre Toys: Past & Present – where action figure experts and toy company representatives will talk about past trends and reveal the latest news and figures.

Cosplay Contest – Lucha libre fans have been coming to events dressed as their favorite luchadores for decades! Now, Expo Lucha attendees will have a chance to show off their costume skills.

Custom Figure Contest – Highly detailed custom action figures have become a major part of toy culture and for the first time ever, luchadores will judge and vote on which custom figure maker should be crowned champion!