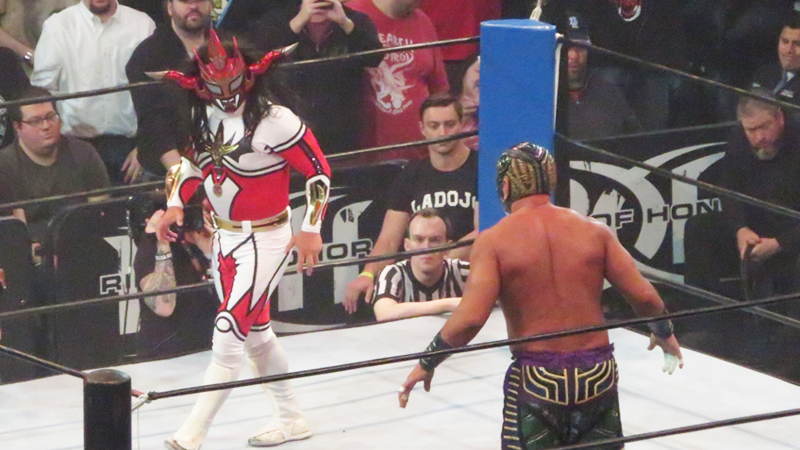 Jushin Liger will take on Minoru Suzuki at NJPW King Of Pro Wrestling event in a Tokyo Dome contract match. Liger recently reappeared as the frightening Kishin Liger to scare the daylights out of Suzuki and the two are now set to face off at Ryogoku Sumo Hall on October 14. NJPW advertises Liger in his “Thunder” persona, but who knows if Kishin will make a run-in?

In the fifth match of the evening, Jyushin Thunder Liger faces Minoru Suzuki in a long awaited singles match. This whole issue started almost six months ago, as Liger was celebrating his 30 year history under the world’s most famous mask. Suzuki would remind Liger of his dominant win in Pancrase back in 2002, as Liger was Suzuki’s last opponent in his fabled mixed martial arts career. Suzuki viciously attacked Liger, who demanded he face Suzuki in a one on one match under pro wrestling rules, rather than the all out fight Suzuki demanded.

During the Road to Destruction, Suzuki reignited his issues with Liger. Unprovoked, the self proclaimed King of Professional Wrestling attacked Liger while he was commentating ringside, and delivered a Gotch Style Piledriver onto a chair. Liger grew further incensed with Suzuki’s approach, declaring that Suzuki ‘had no place in a New Japan ring’. In Kagoshima, Suzuki would attack Liger after his match and forcibly remove his mask, declaring it represented the long since departed soul of the great Liger; it only sought to open Pandora’s Box.

On September 22 in Kobe, a six man tag team match was quickly cut short when Liger voluntarily unmasked himself to reveal the terrifying visage of Kishin Liger. Kishin Liger has been seen but rarely over the years; a total of three times in the past, starting when Liger had a blood feud with the Great Muta in 1996, and last seen in 2012 when he was unmasked by Taichi in a tag team battle. This time it seemed the ‘fierce god’ was even fiercer, as he charged at Suzuki with a pointed spike aimed right for his head; Suzuki avoided the steel which pierced a thick wooden table instead.

Suzuki has implied that he wanted to fight the feared Kishin, but perhaps even he does not understand what he has wrought. What will be the result of this carnage in Ryogoku?

There are plenty of other big names on the card as well. NJPW released the full card for the event and they are below.