HomeNewsJuice Robinson On Jon Moxley: ‘He’s A Monkey On My Back’

Juice Robinson On Jon Moxley: ‘He’s A Monkey On My Back’

Juice Robinson On Jon Moxley: ‘He’s A Monkey On My Back’ 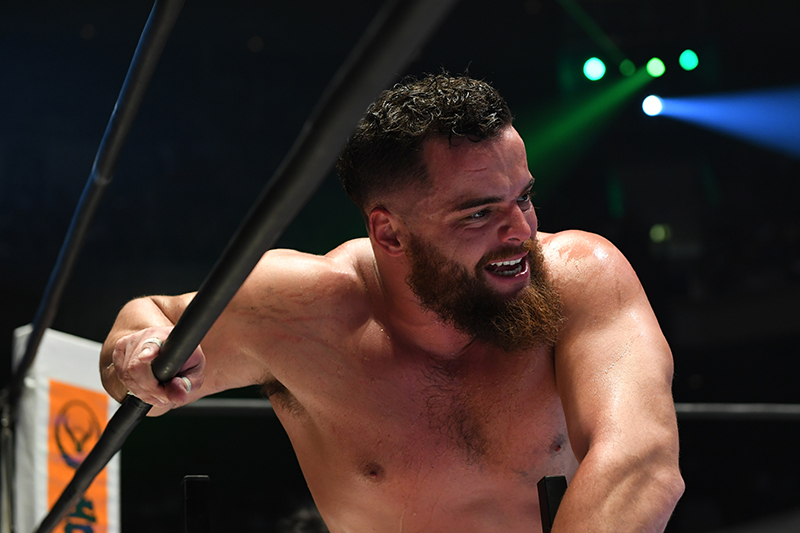 The New Japan Pro-Wrestling website sat down with the number one contender for the IWGP United States Champion Juice Robinson before he goes head to head with Jon Moxley for a third time at King of Wrestling on October 14. Juice talked about his upcoming “rubber match” and how he’s been relatively mute since his June 5 loss against Mox. Quotes from the extensive piece are below:

After you lost on June 5 you’ve been fairly quiet, and not giving comments backstage, or leaving it to your tag partners…

“I was basically humiliated. I’d done a lot of talking before that match and I basically put my foot in my mouth and ate my words. So now I figured I should bite my tongue, and focus on beating him before I talk again. Truth is I don’t have all that much to say. Everybody knows that title meant- means- a lot to me. Everybody knows how bad I want to get it back, so I’m going to let my actions speak louder than words.”

“I was healthy this year, which was big. Everybody said I looked more serious, but I was just more focused. I was trying to take one match at a time. The G1 is not the place to dance around and skip to the ring, but I’m still the same guy. After I win the title back, you’ll see me in Korakuen next week hopping around happy as a pig in s**t. Not now and not in the G1.”

So like you said, this is the rubber match. The first time on June 5, you had to wrestle his kind of match, and you lost. In the Budokan, you made him wrestle at your pace and you won. Now this time it’s No Disqualification which…

You said that you know what to expect from Moxley now. How has your image of him changed over the last four months?

“It hasn’t really changed since June. I caught him at a lucky time in the G1. I know he was hurting, he had a tricep issue, and I think he’s had surgery since. Now he’s probably coming in healthy, without the grind of the G1, when my body was perhaps in better shape. It’s going to be just like in June. He’s coming here to whip my ass. I knew that the first time, so nothing’s really changed, but now I have another chance in the same place.”

Yes or no question; is Jon Moxley 100% focused on Juice Robinson Monday night?

“No. I don’t think so. I still think that even though we’re 1-1 and this is the rubber match, I still think he sees me as a little 21 year old kid that he can just walk in and whoop my ass. I have to prove him wrong, and that’s fine. Let’s do that one more time.”

All the way through the G1, with your match with Moxley last on the schedule, the speculation was whether you were more focused on getting two points or beating Jon Moxley. Which is more important; proving you’re better than Moxley on his own terms, or winning the US title?

“That’s a great question, and such a difficult one to answer. I think that the title means more to me. I’d like to say that being the champion means more. But now I’m thinking back to ten years ago, and the way he still looks at me. I know he doesn’t respect me. I just don’t know.

“He’s a monkey on my back. He thinks that because he’s been doing it a few years longer, and he went on that fast track to the top in another company, he’s always looked down on me and that pisses me off. I have to beat him to get his respect.”