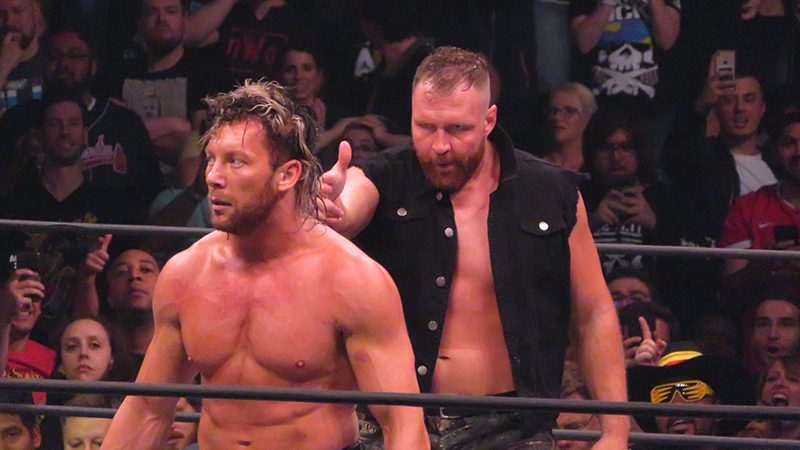 AEW Full Gear finished with a Lights Out Unsanctioned match between Jon Moxley and Kenny Omega. The match included numerous weaponry such as a barbed wire bat, a garbage can, and chairs.

The tables came out later in the match as Omega pulled out a table along with a broom wrapped in barbed wire. Omega hit Moxley with the broom multiple times which caused Moxley to begin bleeding all over.

Omega putting a new meaning to the nickname "The Cleaner" pic.twitter.com/m1VlyOPMya

Omega then pulled out a large piece of plastic that had multiple mouse traps on it. Moxley turned the tabled and slammed Omega down onto the traps causing a loud “AEW” chant in the crowd. Gold anchor chains were retrieved under the ring from Moxley and Omega was also slammed onto them.

Both men were bleeding pretty bad at this point but the action did not slow down. Moxley found an ice pick under the ring and punctured the turnbuckle. Omega turned the tables by hitting a pair of snap dragon suplexes. He took the gold chain and wrapped it around Moxley’s neck and threw him over the rope. Moxley was hanging from the rope with the chain around his neck and no feet touching the floor. Eventually he got free and Omega jumped over the ropes sending them both through the table mentioned above.

Omega grabbed some broken glass and bladed Moxley’s fingers. The rest of the glass was poured all across the ring floor. Omega threw Moxley down onto the glass and then drug him across the ring with the glass carving into his back. Moxley crawled through the glass while in a submission hold to get up. The referee also got some glass stuck into him at this point.

Sky-high onto the shattered glass! pic.twitter.com/tLYgwLwRva

Moxley was able to hit a suplex on Omega directly onto the glass as the match would then make its away up the ramp near the stage area. Omega drove the ice pick into Moxley’s head and called out The Young Bucks to go get something for him. They bring a fence wrapped in barbed wire which both men end up getting thrown into. The match still has not ended yet.

Omega kicked Moxley through the Full Gear plexiglass logo on the stage and again both men rose up to continue on. At this point the superstars made their way back into the ring.

Moxley tore the ring apart, peeling off the ring mat and layer of padding. The superstars continued to exchange maneuvers on the wood and kept kicking out. Omega went face first into the wood when jumping off the tope rope as Moxley rolled out of the way. Moxley hit a Paradigm Shift to win the match after 30 minutes of intense action.