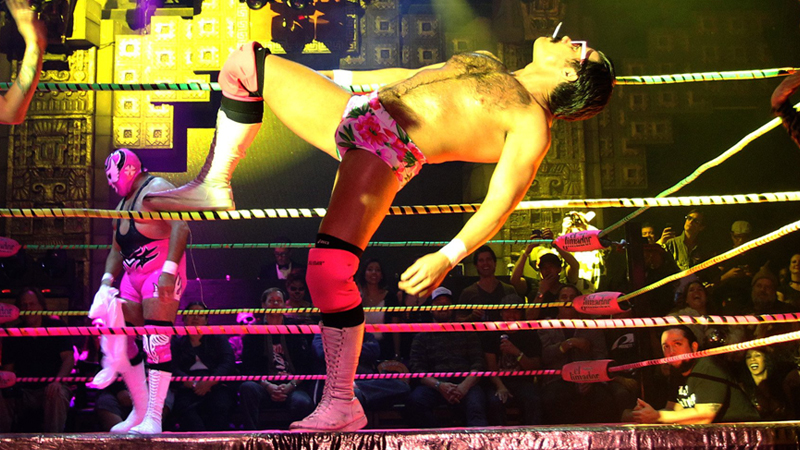 Joey Ryan was Bound For Glory this weekend, and now he’s gearing up for a ‘Fiesta Fantasma’ this week as his next stop in a busy schedule.

Ryan spoke with WrestleZone’s Kevin Kellam before he teams up with IMPACT Knockouts Women’s Champion Taya Valkyrie at LuchaVaVOOM’s set of Halloween shows at The Mayan Theater in Los Angeles on October 23 and 24. Ryan explains what makes a promotion like LuchaVaVOOM so alluring, noting that it’s much more than just a wrestling show when fans show up.

“I call it a variety act because there’s professional wrestling, there’s stand-up comedians, there’s burlesque dancing, there’s sometimes musical performances. So it really is just like a fun show of a variety of different acts, but it does reach an audience that traditionally pro wrestling maybe doesn’t even reach.” Ryan said. “You go there and it’s a lot of people that are just out on the town for date night or whatever, a lot of just local people. People come travel and it’s got quite a big buzz around the world, Lucha VaVOOM, but it’s become its own identity. Like Lucha VaVOOM itself is like a subcategory of pro wrestling.”

Joey also spoke about what it’s like tagging with someone like Taya, who cut her wrestling teeth down in Mexico. Ryan has stood with and against ‘La Wera Loca’ in the ring before, and he says this match should be a fitting addition to the VaVOOM vibe.

“Me and Taya, we’ve been rivals, we’ve been teammates, we get along. We’re gonna go at it with Dr. Muldad and Nurse Ratchet. It’s a Halloween show and Nurse Ratchet’s a spooky character so that’ll be fun for the Halloween vibe and Dr. Muldad is a CMLL vet,” Ryan noted, “and Taya made her name in Mexico so there’s gonna be some great Lucha libre in this match as well which fits the Lucha VaVOOM motif.”

Ryan made a surprise appearance about Bound For Glory in Chicago on Sunday, and quickly confirmed reports that he’d signed a multi-year contract with the promotion. After getting out of his Lucha Underground contract earlier this year, Ryan had previously said he was sticking with the indies and spoke about the abundance of work and how it was friendly to his style. He now tells Kellam about the decision to sign with IMPACT, not only citing the talented roster, but the way management is encouraging talent to be unique with their own personalities and gimmicks.

“It’s a televised wrestling show and it’s a great wrestling show. People have been sleeping on it because you know it historically it’s been not necessarily well-received by at least the Internet wrestling community, but the last couple years—Tessa Blanchard, Brian Cage, Sami Callihan, The North. These guys are amazing wrestlers,” Ryan said, “but they’re slowly starting to build that buzz back up and it’s so cool. They’re really encouraging everybody to make their own mark and be their own individual personality. They’re not trying to like cookie-cutter anybody or they’re not trying to wedge their ideas on somebody who may not be receptive there. They’ll work with you, they’ll tell you, ‘This is what our idea is. Would this work for you?’ or, ‘Give us your take on this idea and we’ll see if we can come to a medium.’”

Ryan says IMPACT has been much more open than any wrestling company he’s worked with about being open to talent ideas. He also said the company made him a favorable monetary offer too, but the biggest selling point for him happened to be some of the creative freedoms he’ll maintain as well as the company not wanting him to change who he is.

“And for me, personally—because you hear some of the horror stories—but they made a monetary offer to me that I wasn’t expecting. Not only that but they offered me non-exclusivity so I can still do any independent that I want and I still keep my merchandise store at Pro Wrestling Tees and I can still keep my YouTube channel which creates a lot of buzz for me. So that was very appealing to me,” Ryan said, “because I get to on this great television product but I also get to still be Joey Ryan. And on top of that, they told me they want Joey Ryan. They don’t want to change me, they see the buzz I create, they see that the fanbase I’ve grown, they see the money I’m making and they like, ‘We want all of it. We want you to be on IMPACT as you cause that’s going to serve our product best, that’s going to serve the wrestling community best.’”

You can listen to Kellam’s entire interview with Joey below, including more on Joey’s latest venture with IMPACT Wrestling, the return of his Penis Party at WrestleCon, cosplay tips for Halloween and much more. You can also find more event information including advertised matchups under the audio player:

Los Angeles’ longest-running, most celebrated action-packed variety show will treat its hometown faithful to a huge helping of good vs. evil, professional Lucha libre-style wrestling straight from Mexico City, Tijuana, Guadalajara, and Juarez (think WWE with more action). In between matches, the finest handpicked burlesque acts will wow the crowds with high-octane performances and their unique striptease skills, including raucous aerial acts. Fans are encouraged to wear costumes to this 21+ event and tickets are still available at LuchaVaVOOM.com.

Matches on both nights:

The Sexi Mexis vs. The Crazy Chickens

Lil’ Cholo and Dirty Sanchez vs. Sismo and Pinatita