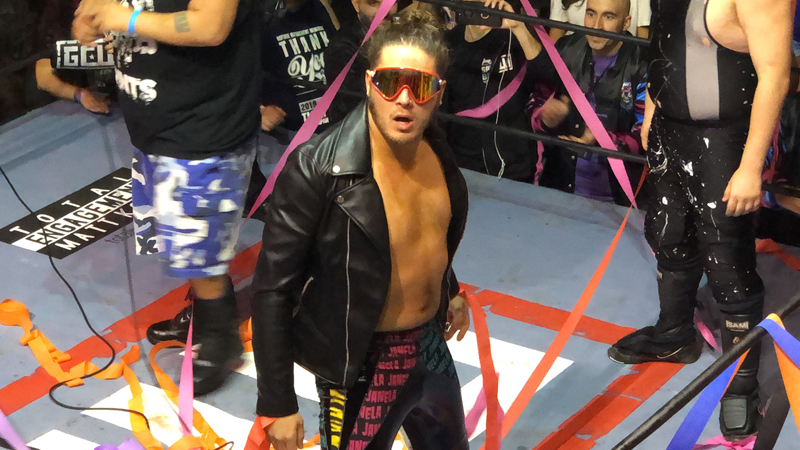 Joey Janela was recently featured on a new episode of “Wrestlers On The Road Ordering Room Service” with The Young Bucks. Janela had an opportunity to share what happened when he saw nZo again after their infamous Blink-182 concert fight.

Janela then goes back and recount the unfortunate situation involving him and CaZXL’s backstage incident after a relapse in Rahway, NJ. Janela talks about how surprising the situation was.

“I don’t know what happened. I went outside for a smoke and I said hello to the dude earlier and he was like, ‘Hey, what’s up?’ I go outside to smoke and then he corners me, and like smacks me in the head.” Janela said. “It’s not a hard smack it was just caught me off guard. No concussions, I was like , ‘What the fuck is going on here?’ And then he starts chasing me, ‘Joey, I’m coming to kill you.’ Orange Cassidy is there and he starts like, ‘What the hell is going on?’ He thinks it’s a joke. Yeah, hands in pockets, gimmick is real.”

Nick Jackson then asked Joey if he thought it was a joke. “No, I started to realize that it wasn’t a joke at all. Like something was up from the night before. So they put me in a separate office and then they’re like, ‘Oh just stay here. Lock the door.’ Cause this guy’s like seven feet tall. Like I’m legit scared,” Janela explained, “So I’m in the office and I then I go, ‘Oh my gear’s in the locker room again.’ There’s like a curtain back there, I go to go back there and I see him opening every door, ‘Bad Boy – where are you?’ Like it’s a horror movie now. I go, ‘Oh, I’m outta here. I’m outta here.’ So I ran, eventually I got my gear and stuff, I called the match (tried to call the match). I go out Gorilla and he comes in through the door and charges at me, tries to get me again. Everyone’s holding him back. And then the whole thing went down with him and SCU and Pat [Buck].”

Janela then expressed his sadness for CaZXL’s moment of trouble.

“I feel bad because I had friends that had substance abuse problems. One of my best friends overdosed so I feel for him. To me at time of it, it was kind of a funny story like, ‘Oh, this guy tried to kill me.’ People leaked it on the Internet.’ I’m like, ‘Oh, this is crazy.’ And then the next day I felt like complete shit.” Janela said. “He just didn’t know what he was doing and I felt bad. Yeah, not press charges, just tell him what was going on and get him to a hospital. You know he was dealing with something crazy.”

Read More: nZo Wants To Reinvent People’s Perception Of Him As A Professional Wrestler