HomeNewsJoey Janela On Proving His Worth As An In-Ring Performer, Being A Polarizing Figure On The Internet

Joey Janela On Proving His Worth As An In-Ring Performer, Being A Polarizing Figure On The Internet

Joey Janela On Proving His Worth As An In-Ring Performer, Being A Polarizing Figure On The Internet 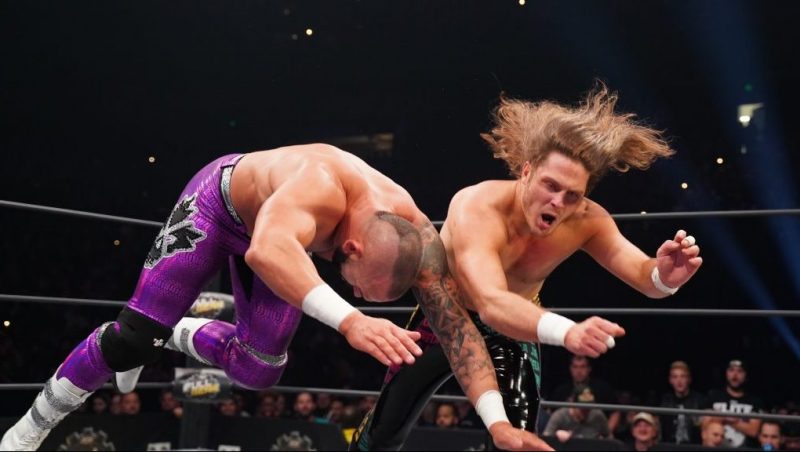 Joey Janela says he’s OK with being a polarizing figure, but he also wants to show people that he’s a more capable wrestler than they’ll give him credit for.

Janela spoke with Wrestlezone’s Dominic DeAngelo at Starrcast IV, and he was asked about his recent opportunity at showing his in-ring mettle when it comes to working a straight-up wrestling match against Kenny Omega. Janela talked about the misconceptions made about him to the larger fan base and talks about his love and passion for the wrestling business, saying he’s a better wrestler than he gets credit for.

“I just want to prove everyone wrong. When I got thrown off the roof by Zandig, everyone thought I was a shitty garbage wrestler and then I proved everyone wrong in the coming years saying, ‘Oh, he can actually wrestle,’” Janela said, “and I turned a lot of haters into fans that bought my t-shirts and now I’m doing this on a larger scale. But when you’re on TV, people perceive you in a different way and they want to take you down. I notice a lot lately that people on Twitter trying to take me down and get me fired. I don’t know why you would want to do that to someone who’s worked fifteen years to get to this position and a lot of people say I’m untrained but it’s not really the case.

“After I came into the business untrained, I went to training. I have years of wrestling school experience and I also, I’ve done over 60 camps and seminars of ‘who’s who’ in professional wrestling. I probably have the most extensive camp seminar list out of any wrestler wrestling right now so people just don’t get that and they don’t get how much I love the business,” Janela said, “but I like being polarizing on the internet and I love being loved and hated. It’s just awesome. The most polarizing people make the most money. Look at Kanye West. He does something bad, people hate him, he does something good, people love him.”

Janela also uses Marilyn Manson in the ’90s as a polarizing person in pop culture, but the ‘Bad Boy’ has an optimistic attitude about the negativity he receives when he factors in the rhythm of how the wrestling world rolls. Janela says the haters can keep helping him get over and joked that next year they’ll become fans of his anyways.

As far as Twitter is concerned, Janela has a very love-hate relationship with the platform. He says he does have the backing of a lot of legacy names in wrestling but one thing he isn’t a fan of is the perpetuation of false information, particularly with another wrestling personality he is all too familiar with in Jim Cornette.

“Some stuff, it does rub me the wrong way. A lot of people like [Jim] Cornette and Brian Last [were] pushing that I hurt Marko Stunt last week which was not the case at all. He’s like a brother to me,” Janela said. “My track record speaks for itself. I’ve been wrestling for 15 years, I’ve done some of the craziest things to myself and to others and no one has ever been injured by me so my track record speaks for itself so those guys can really go fuck themselves.”

Read More: Taz On Getting The Bug Back For Commentary, MJF’s High Ceiling & Promos From The Heart (Exclusive)