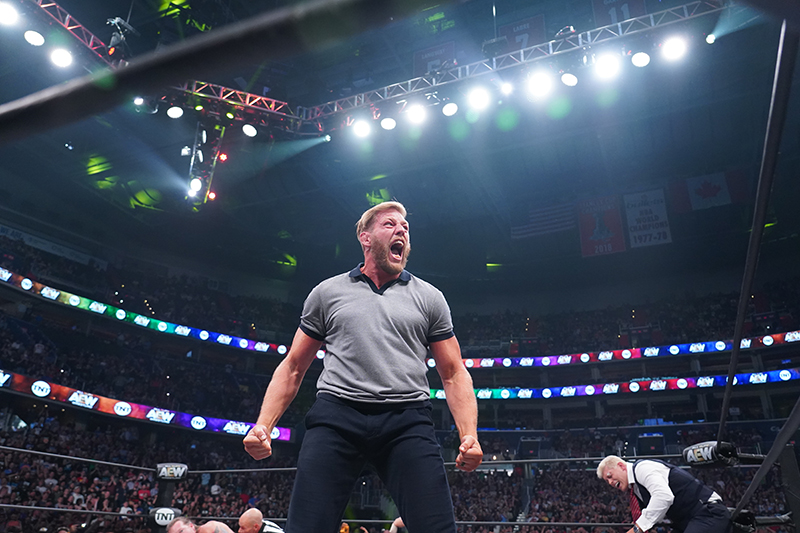 There’s a lot left on the bone for fans (both of the casual and ardent nature) to chew on after the first week of AEW Dynamite. In comparison to NXT, Monday Night RAW and even Fox’s Friday Night SmackDown, Dynamite still packs that new car smell more than any other mainstream wrestling product leading into this week. Plenty of that reason is because they left a lot of questions unanswered, stars unseen and familiar faces integrated in a new environment.

That includes (and somewhat epitomizes) Jake Hager, who has returned to wrestling after being bounced up and down the card of WWE for nine years. His tenure as Jack Swagger had some memorable moments, but just like the majority of the “name your talent” in WWE, suffered greatly from “even stevens” booking, heavy scripting and leverage being in favor of the company.

Well, now that leverage has changed.

Hager mentioned how leverage was big for him in an interview with Ariel Helwani back in May while a potentially AEW run for him was being prodded at. “New platforms for young businessmen who are serious and who are trying to provide for their families to come out and excel, and excel the way you want to and work with the people you want to and build your brand the way you want to, which is the most important thing. Whether you’re a pro wrestler or a pro fighter, you want leverage and this gives me the opportunity to increase more leverage for myself.”

Since then, Hager’s built his credibility cache with two wins in Bellator. Being an ass kicker is important to both wrestling fans and fight fans in general (just see the Tyson Fury, Cain Velasquez and Lesnar injection as of late, the Saudis will love it!) Hager displayed that capability to ass beat in a smaller, but different “Universe.” Carrying the actual ability to punch over to a pro wrestling ring certain packs one, but so does motivation. According to Wade Keller of The Pro Wrestling Torch, Hager has that too.

On this past week’s edition of the “Bruce Mitchell Audio Show” Keller gave some added insight as to how the top folks in AEW view the former Jack Swagger as a member of their growing roster.

“People in AEW are telling me he is super-motivated, he’s regained his confidence that he lost in WWE and there’s some powerful people in that company, influential people, who think he is going to be not a support player, a guy standing behind a star, but be a star. And if that’s what they think and he can deliver deliver on that, then that will show itself in the next couple months.”

So he has leverage, he’s got motivation, we know he can wrestle – what are the most important pieces to the puzzle? Personality and presence, something that WWE is really fantastic at stifling when you are placed on their programming. From Shinsuke Nakamura to Finn Balor, to the most recent escapees in Jon Moxley & Shawn Spears, Vince loves putting hats on personas that don’t need it (or want it). Hager had Dutch Mantell who was wonderful in his role as Zeb Colter, but is a heavily divisive & politically-charged angle the best way to put a new star over, particularly when he doesn’t win on a consistent basis? He had his Swagger Soaring Eagle at his side during his world title run and I’d argue he made what he could with a plush mascot, even if humor was a primary focus.

"The Swagger Soaring Eagle" was a brief window into to what a young Hager could do at the time in showing (even a stifled) personality. Now with a fighter's cache in tandem with an unscripted opportunity with AEW, we will see what Jake is capable of. pic.twitter.com/lV7n2Kvvio

We haven’t truly seen Hager’s “swagger” yet and I think the fact that WWE even gave him the opportunity to showcase it with two “top of the card” runs is a strong tell that he has it. Him being a featured player in the story-driven Lucha Underground product also echoes such sentiments.

Starting Hager out as the potential enforcer of Jericho’s seemingly new stable is an excellent way to kick start things. Let him do the crew’s dirty work with the opportunities of getting the stick in front of him and let it simmer for a year-plus before eventually getting sick of Jericho’s spotlight stealing. We’ve seen it work before 15 years ago with Batista thumbing down Triple H, this could be the thumbs up for Hager.

It’s been the fans’ tendency to hold former WWE talents with a TNA vibe of “recycled rehash,” but let’s be clear: AEW isn’t TNA. It’s got a much larger platform with more sound minds steering the ship. Shawn Spears and (to a greater extent) Moxley has shaken off all that stink when it comes to their own respective rebirths. Hager has that shot, and I say the viewers should give him a fighting chance.

Thoughts? Transgressions? Intimate feelings? Express them to me on Twitter @DominicDeAngelo and lemme have it.

More from Dominic: AEW’s Dynamite Debut: What Lit Up The Wrestling World & What Fizzled Out

In AEW Dynamite’s post-show scrum interview with Tony Khan (who Wade Keller also spoke with early last week), the AEW President gave an update regarding Hager’s ability to balance his time with Bellator and AEW:

“We planned it all along. I mean like for him to do his training it’s something we’re going to have to account for so he moved his camp to accommodate this but he’s also still in training and he’s in good schedule with that, but the AEW schedule with working Wednesdays allow him to kind of make Wednesday the off-day, Wednesday, Thursday so he can train Friday to Tuesday so that’s what Jake’s doing right now.”