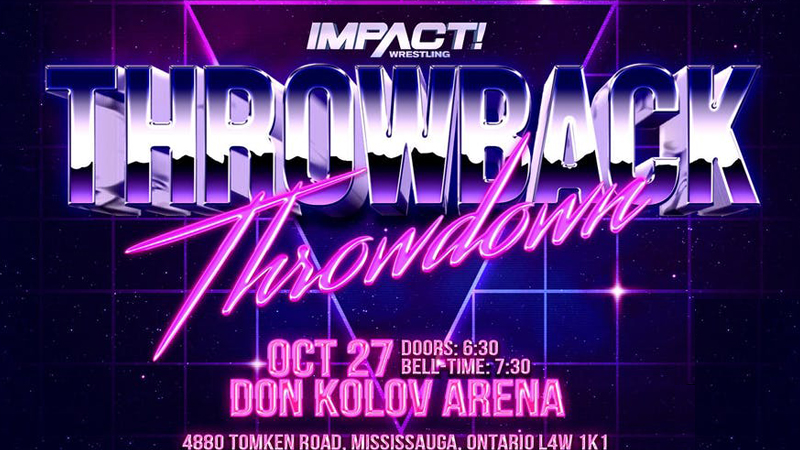 The following matches and segments were taped as part of last night’s IMPACT Wrestling Throwback Throwdown event at the Don Kolov Arena in Mississauga, Ontario, Canada. The event was previously set to be a Twitch broadcast, but last week it was changed to an AXS TV taping. According to an announcement at the taping, the event will premiere on Tuesday, November 26. IMPACT was referred to as the ‘IMPACT Provincial Wrestling Federation’ for the taping.

Workers got the win when Oates (Cody) pinned Pummel. After the match, Plunder gives Hall (Jake) and their top hats a big splash

Swinger won with a swinging neckbreaker. They dressed as themselves.

Jazzy wins via top rope splash. The Hitmaker Sebastian Baker (Jimmy Jacobs) came out to observe and recruit Jazzy, who signed a contract, then tears it up and lowblows Jacobs

Kongo Kong and manager (RD Evans) come to the ring for a $2000 Bodyslam Challenge. Ali comes to the ring and fails, then Evans ups it to $3000. Mr. Atlantis tries and fails after Kong beats him up. Brian Cage enters the ring and says he’s not there for the money, then beats up Kong.

Moose won after a spinning clothesline

Edwards won with an Ace Crusher. Michael Elgin and Madman Fulton came out dressed up as Russians and beat Edwards up. Scott D’Amore (as Arnold Skaaland) tried to stop it and got beat up himself.

Iceman then interviews D’Amore (as Giuseppe) about the attack, and he challenges the Russians to a tag match

Cage won by submitting Fulton in a Torture Rack

Brown wins via pinfall. The whole roster comes out to celebrate to end the show.

Scoop- Excessive Force vs the Hard Workers (The Deaners) pic.twitter.com/V1ihxgzlYP