For those that missed my interview with Stevie Ray on Thursday! During fan REACTIONS discussing Dave Meltzer disrespect toward STEVIE RAY… ONE HALF OF HARLEM HEAT THE 10X TAG TEAM WORLD CHAMPION and future WWE HOF STEVIE RAY MADE A UNSCHEDULED SHOCKING APPERANCE DURING OUR SEGMENT and we went into exclusive interview mode! THIS WAS ONE OF THE BIGGEST INTERVIEWS OF MY LIFE AND THIS INTERVIEW DID NOT DISAPPOINT! CHECK OUT THE INTERVIEW AT 1:46:54! SHARE! SHARE! SHARE! SPECIAL SHOUTOUT TO The current GWE NWA Georgia Heavyweight champion Real deal Flex Steel and Stevie Ray for making all this DREAM POSSIBLE! THANK YOU! 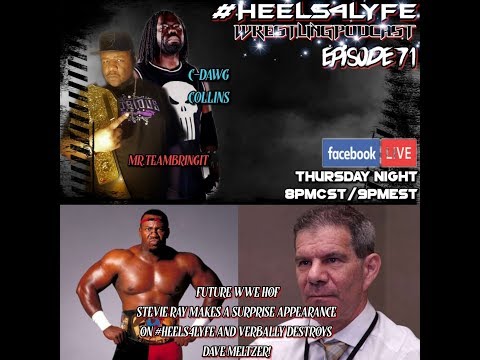