This is one helpful wrestler and grappler! Goldberg’s victories are well publicized. His record-breaking 173-match
winning streak is what made him into a can’t-miss part of
WCW Monday Nitro every single week. But at some point, everyone loses,
and Goldberg is no exception. Here are the seven
superstars to defeat him, we begin with the man
who ended the streak. Kevin Nash won a 60-man
Battle Royal at World War 3 to earn a WCW Championship match. But unfortunately for him, that meant a date at Starrcade
1998 with the undefeated Goldberg. But there might not have been
a competitor more confident than Nash. Big Sexy proudly declared
that he was next, and he came to his no-disqualification
match with a plan. With Goldberg in full control, Disco
Inferno and Bam Bam Bigelow attempted, and failed, by the way, to interfere. Then as Goldberg sized up Nash for
a spear, a security guard who was oozing with machismo shocked
the champion with a stun gun. Nash hit the Jackknife Powerbomb and defeated the seemingly
undefeatable competitor. Goldberg and Bret Hart were once WCW Tag
Team Champions for less than a week. Their one-on-one battles were decidedly
in the Hitman’s favor, though. Hart defeated Goldberg
three times in 1999 alone. First, he fought through a hairline
fracture of his ankle on the October 25th episode of Nitro to win
the United States title. Thanks to an assist from Kevin Nash,
Scott Hall, and Sid Vicious. They fought again at Starrcade 1999 with
Hart’s WCW Championship on the line. And he retained after a Roddy Piper
controversial call for the bell during a Sharpshooter. And the next night on Nitro,
Hart defeated Goldberg for a third time thanks to Nash, Hall, and
Jeff Jarrett, creating the New NWO. There’s a lot to digest
with Goldberg’s next loss. [COUGH] So on July 24th,
2000, episode of Nitro, Goldberg wanted a WCW Championship
match against Booker T. But it was decided that Booker’s
challenger would be determined by a fan vote on wcw.com. Sting won the vote, but
Goldberg took out the Stinger and demanded to face the champion. Goldberg was ruthless in this match,
causing Booker’s brother, Stevie Ray, to throw in the towel. The title didn’t change hands, so Goldberg
threw Stevie Ray through a glass window to get another opportunity
later in the night. This time, interference from Jeff Jarrett
and Ernest The Cat Miller slowed Goldberg down enough for Booker to hit
the Book End and retain his championship. Scott Steiner was one of
the few superstars in WCW who could match Goldberg’s strength. He was nicknamed Freakzilla for a reason. These monsters collided at Fall Brawl
2000 in a no-disqualification match to determine who was
the real powerhouse of WCW. The bout was a physical display as both
superstars showcased their strength. But the combination of Vince Russo,
Steiner’s valet in Midajah, and a steel pipe made the difference. Midajah hit Goldberg with a pipe,
setting up a top-rope suplex. When that wasn’t enough,
Freakzilla grabbed the pipe and locked in the Steiner Recliner for
the win. When Goldberg arrived to Raw in 2003,
he found himself amid the Triple H era. The Game was
the World Heavyweight Champion, and his reign showed no signs of stopping. Scott Steiner, Booker T, and Kevin Nash all fell short
against The Game and Evolution. Goldberg was no different. At SummerSlam 2003, Triple H was
forced to defend his championship inside the Elimination Chamber. And on paper, that’s a disadvantage. But nothing could stop Evolution
from helping The Game. Goldberg destroyed the competitors in the
chamber match until it was down to just him and Triple H. But then Ric Flair slipped
a sledgehammer to the champion, giving Triple H the edge to
pin the WWE Hall of Famer. Brock Lesnar had defeated everyone
who crossed his path except Goldberg. Lesnar’s defeat at
WrestleMania XX stung for years. When they met 12 years later at
Survivor Series 2016 for a rematch, Goldberg’s quick win just
agitated The Beast even more. So Lesnar and
Paul Heyman challenged Goldberg to one more match at WrestleMania 33
with the Universal title on the line. Lesnar survived four spears and
a Jackhammer to drop the champion with an F5 and seize
the victory that had eluded him for years. >> One, two, three! [APPLAUSE] [SOUND]
>> When Goldberg returned to WWE in 2016 and 2017, we got a sneak peak
at several dream matches. But none bigger than him
against the Undertaker. The two legends collided in
the 2017 Royal Rumble match, and that just made us want more. Then in 2019, the dream bout became
a reality at WWE Super Showdown. Goldberg had the Undertaker reeling
early with a pair of devastating spears. But ultimately, the dream turned
into a nightmare for Goldberg, as his night ended in defeat. That’s our list, after seeing Goldberg
defeat Dolph Ziggler at SummerSlam, it has us thinking. Who would you want to see the icon face? Let us know in the comments below. Until next time, thanks for
watching List This!
%random_sentence2%% 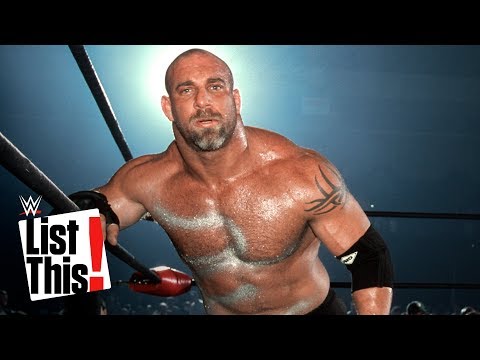