Homeall elite wrestlingEmber Moon On Wrestling Bayley: ‘It’s Like Wrestling A Weird Version Of Myself’ 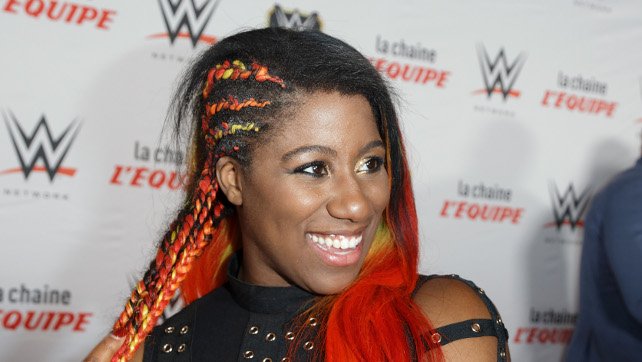 Speaking with RondaRousey.com, Ember Moon talked about her recent battles with Bayley over the WWE SmackDown Women’s Championship. While she didn’t win the title at SummerSlam, she hopes it won’t be her only opportunity. “A little sore, a little defeated. But I’m super motivated to try and get back in that contendership, and just try and move forward.” When asked what it’s like to wrestle Bayley, Ember compared her opponent to herself. “She’s tough, she’s hard-hitting, she’s extremely passionate, just like I am. So it’s kind of like wrestling a weird version of myself.”

Speaking of SummerSlam, Ember said that she was initially excited to hear that she was following AJ and Ricochet’s bout. Then she saw the match. “I see Ricochet do this Phoenix Splash and AJ catches him in a powerbomb and then goes Styles Clash, and that was the end of their match, and I was like, “Well, there’s nothing we can do”

Later, Ember talked about who she wants to be in the ring. “I don’t strive to be anything but me, and I strive to be different. I don’t consider myself a “sex symbol” or “sexy,” and some people have those gimmicks and it’s fine, but I just want to be the first Ember Moon. They always say that you emulate someone, and there are a lot of people that have had an influence on my career, but I’ve never really emulated anybody.”